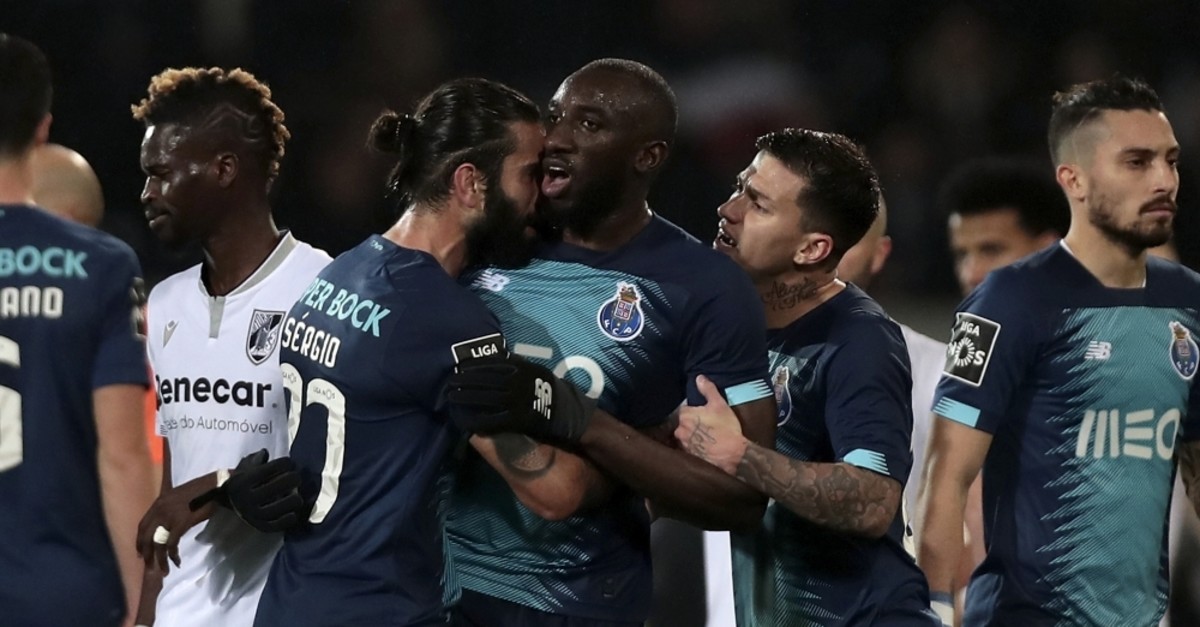 Despite billions spent on campaigns by world football's governing bodies and hefty fines on any offenders, hardly a week goes by in European football without an incident of racism or discriminatory attack.

Porto striker Moussa Marega's attempt to walk off the field last week after being the target of racist abuse from fans highlighted how deeply ingrained the issue is in football, or most sports for that matter. Marega, who is black and plays for Mali, was visibly angered by monkey noises targeting him after he scored Porto's second goal in a 2-1 win at Guimaraes in the Portuguese football league.

The incident further flared up when Marega was shown a yellow card by referees after he answered to his attackers by celebrating his goal as he pointed to his arm to show his skin color. As the match wrapped up, a familiar chain of events followed, with both teams condemning the racist attacks and Porto coach Sergio Conceicao criticizing the fans' behavior.

"We are indignant with what has happened. Moussa was insulted from warmups ... We are a family. One's nationality, color, or height does not matter. We are human beings. We deserve respect and what happened was despicable," the manager said.

Despite condemnations and harsh words, however, not much seemed to change as Marega was neither the first nor will be the last footballer at the receiving end of racist attacks.

No country in Europe appears to be immune from racism at football grounds as clubs struggle to contain the problem despite heightened efforts by football authorities, as an increasing number of incidents in the past year showed that not much headway made in the fight against racism.

Turkey is no exception either, as Trabzonspor's John Obi Mikel was targeted by Fenerbahçe fans after the Black Sea club defeated the Istanbul giants 2-1. Following the match, Mikel claimed Fenerbahçe midfielder Emre Belözoğlu insulted him and his family.

While the accusation was never proved, Fenerbahçe fans took to social media to target the Nigerian footballer. His Instagram profile received scores of racist messages including the use of the N-word and banana emojis.

In 2019, dozens of footballers were targeted in racist attacks across Europe.

Italy's top-flight Serie A league caused great controversy in December after launching an anti-racism campaign by presenting artwork featuring three side-by-side paintings of apes, which was described as a sick joke by critics.

Italian officials had initially said the work aimed to defend the values of "integration, multiculturalism and fraternity", but was forced to backpedal after widespread criticism and ridicule.

A few weeks prior to Serie A's blunder, Italian sports daily Corriere dello Sport ran a headline reading "Black Friday" and with photos of Roma defender Chris Smalling and Inter Milan striker Romelu Lukaku – both black players – ahead of a match between the teams.

While the newspaper defended the headline as "innocent,'' saying its intent "was only praising diversity," UEFA said the headline choice was "unfortunate" and was "unlikely to help a mature discussion of the serious issue facing the game and wider society."

This was not the first time Lukaku was targeted, however, as Cagliari fans in September directed monkey noises at the Belgian footballer during a match against Inter.

After the incident, UEFA President Aleksander Ceferin said European football's governing body is trying to tackle the problem of racism in the game but admitted it could do more.

The U.K. had its share of racism in 2019. Manchester United midfielder Paul Pogba the target of online abuse after missing a penalty in their 1-1 Premier League draw at Wolverhampton in August, prompting Manchester to issue a strong statement condemning the views.

Former Manchester City captain Vincent Kompany, who has himself been subject to racist abuse, believes a lack of diversity in football organizations is part of the problem.

"That's the real issue – if you go through the boards at UEFA or FIFA, the Italian League or the English League, there is a real lack of diversity," he said. Racism is not just a problem inside stadiums but is increasingly seen on social media platforms, prompting the anti-discrimination bodies out to issue a "call to action" to social media companies.

"It needs to stop," Manchester United manager Ole Gunnar Solskjaer said recently. "We keep having all these campaigns – no to racism – and they keep hiding behind fake identities It's just crazy that we are talking about this in 2019."