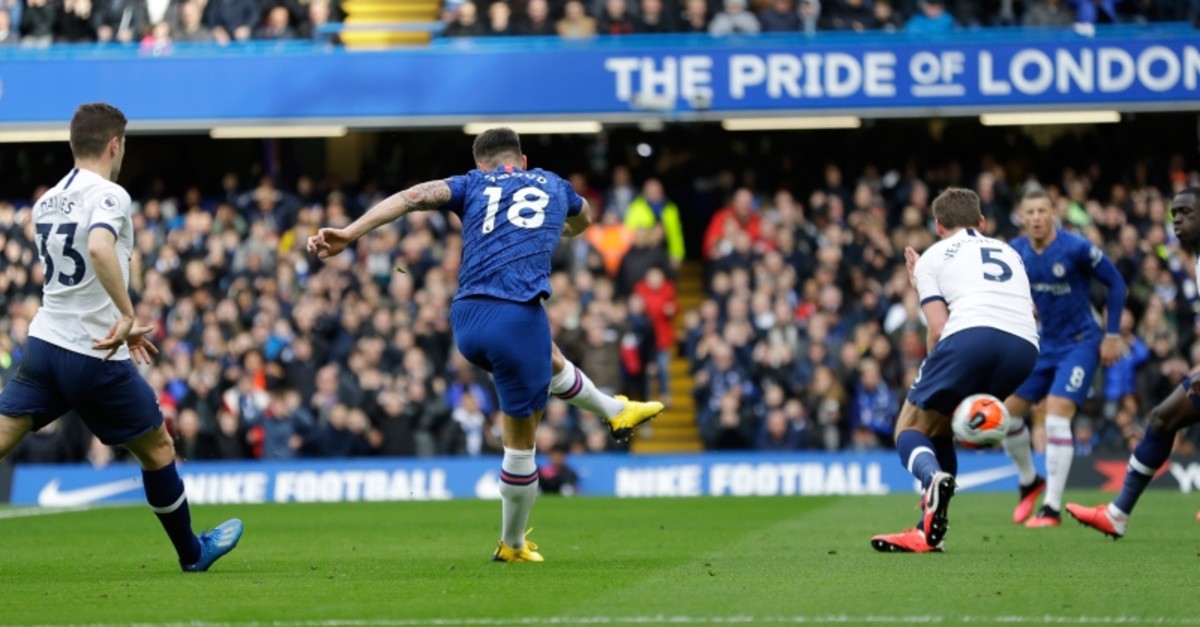 Olivier Giroud and Marcos Alonso marked rare starts for Chelsea by scoring in a 2-1 win over Tottenham on Saturday, keeping their team in the Premier League's top four and ensuringanotherdisappointing return to Stamford Bridge for Jose Mourinho.

Selected in the starting XI for only the third time in the league this season, Giroud lashed home the opener inside the near post in the 15th minute after Ross Barkley had struck the goal frame.

Alonso was playing for the first time since Dec. 22 - that was also against Tottenham - and for only the second time in four months. The left wing back also got on the scoresheet when he drove in a low shot from 25 meters in the 48th.

Tottenham pulled a goal back in the 89th when Erik Lamela's shot deflected in off Antonio Rudiger for an own-goal but Chelsea held on and moved four points clear of its fifth-place opponent.

It was a spiky encounter on and off the field, with Tottenham midfielder Giovani Lo Celso fortunate to avoid a red card after planting his studs on the leg of Chelsea captain Cesar Azpilicueta.VAR ruled it was not serious foul play, but the Premier League later said it should have been a red card.

"I hate to call for red cards but that is a legbreaker," Chelsea manager Frank Lampard said. "VAR is here to clear things up and it is not good enough."

In the stands, Tottenham fans jeered every touch by Rudiger, who complained he was subjected to monkey chants in the first match between the two teams at Tottenham, which was stopped for anti-racism warnings over the stadium speakers. Tottenham and police were unable to find any evidence to corroborate or contradict Rudiger's report of racism.

In the top four since Oct. 19, Chelsea had picked up just 15 points from its previous 14 games and was in danger of being overtaken by Tottenham - led by a coach in Mourinho who was once revered at Stamford Bridge after his two separate title-winning spells there.

But without injured attackers Harry Kane and Son Heung-min, and playing less than 72 hours since the 1-0 loss to Leipzig in the Champions League, Tottenham was unable to maintain its impressive recent form in the league since Mourinho took over in late-November.

"Very happy with the players," Mourinho said. "The players, they give what they have and what they don't have. The majority of the players, especially the attacking ones, go to the limits of their strength."

It was his first return to Chelsea as Tottenham manager for Mourinho. He also lost three times at the home of his former club when in charge of Manchester United - twice in the league and once in the FA Cup.

Lampard completed the league double over Mourinho, under whose guidance he became one of the world's top midfielders in the first decade of this century.

And Lampard might also have to change his mind on Giroud and Alonso, two experienced players he has mostly overlooked this season while preferring to go with youth in his first year at Chelsea.

With Tammy Abraham only just back from injury and Michy Batshuayi playing poorly in the 2-0 loss to Manchester United on Monday, Giroud - who is still a first-choice pick for world champion France - was handed a start against Tottenham and led the line superbly.

He was given a strong ovation when he was replaced by Abraham in the 71st minute and might have lifted himself above Batshuayi in the pecking order for the remainder of the season, especially having scored his first goal in the league.

"We knew it was maybe a kind of turning point," Giroud said of the win. "We lost a bit of confidence. It was nice to bounce back and get this win, a hard win against a rival, so I feel relieved."

Alonso, meanwhile, has lost his place following the emergence of another full back, Reece James, but nearly finished the game with two goals to his name - like he had when Chelsea beat Tottenham 2-1 in August 2017. Tottenham fans still boo him over that double.

Alonso struck the crossbar with a free kick in the 82nd.

Tottenham is still in a good position to qualify for the Champions League, with fifth place currently in line to get into Europe's top competition after second-place Manchester City was handed a two-year ban from Europe for breaching financial regulations. City is set to launch an appeal with the Court of Arbitration for Sport.