The new Turkish national hockey team in the making 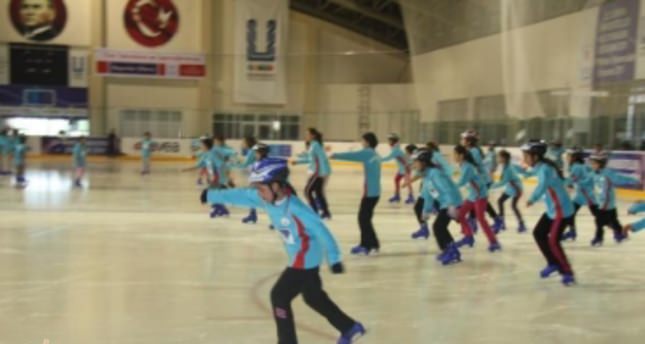 by AA Sep 02, 2014 12:00 am
Seventy school girls between the ages of 10 and 14 are learning to play ice hockey in the Erzurum province of Turkey as part of the "Flowers that Blossom on Ice" project. The winter sports centers in the city, which were built for the 2011 UNIVERSIAD, teaches school girls within a project that is jointly carried out by the Baku-Tbilisi-Ceyhan Pipeline (BTC) Company and Ataturk University. The officials plan to form a team comprised of girls who are good at ice hockey and can represent Erzurum in both national and international competitions. The project coordinator and Atatürk University member Mükerrem Kaya said they have been carrying out joint projects with BTC for the last two years intended for the rural and community development of Erzurum, Kars and Ardahan. He said that they prepare projects that increase the productivity and quality of vegetative and animal productions along with social and cultural projects. He said that their main goal is to improve local people's socioeconomic condition. Within the scope of the project, students have been working two days a week for the last three months and they will continue to do so during the school year. BTC will financially support the project for a year in cooperation with Atatürk University.

The officials will form an ice hockey team out of 20 girls to compete and represent Erzurum in national and international competitions. "We are training future sportswomen here," said Kaya, adding that it is important for them to train sports people in various sports branches in order to become a recognised winter sports center. He further noted that the project, which is carried out in Erzurum, Kars and Ardahan, has cost $1.8 million (TL 4 million). "Our goal is to find more funds for the project. These children went on ice for the first time in their lives. We will train these girls so they can enter the Turkish National Hockey Team. Sporting activities are important for these students." Merve Karataş, one of the students, said that she did not know anything about the sport before starting the project, adding, "We learned to skate and do some moves. My target is to become a national ice hockey player and represent Turkey in the best possible way." Esennur Yakut, on the other hand, said she had always loved ice hockey and she also wants to be a national team player.