Turkey to help children with albinism in Tanzania 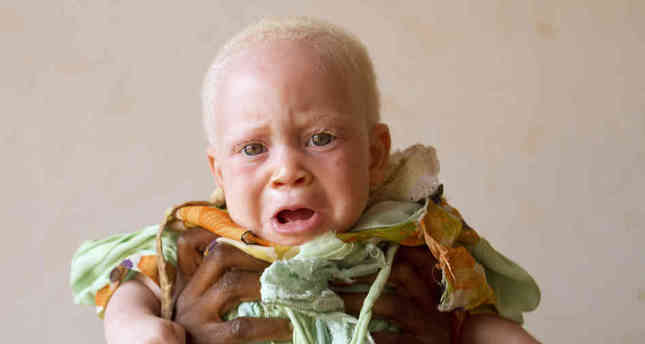 by AA Nov 11, 2014 12:00 am
Turkey has begun to help children with albinism in Tanzania, through a charity called Turkey-Tanzania Aid Foundation.

Albinos have suffered widespread torture in Tanzania and some other African countries, because of some bizarre beliefs that people with albino body parts can bring good luck and treat diseases. Albinos have been socially excluded and have had their lives threatened,

The Turkey-Tanzania Aid Foundation's founder, Yeşim Davutoğlu - the wife of Turkey's ambassador to Tanzania, Ali Davutoğlu - said that the nation of Turkey comes to mind when Tanzanian albinos need help or protection. Davutoğlu, stressed that the Turkey-Tanzania Aid Foundation was established to help people with albinism in Tanzania and that they have planned an "Albino Village." The project village will play an important role in the protection of albinos' fundamental rights by establishing a safe and sheltered zone.

Around 1,000 albino children will shelter in the complex that will be built by the Turkish NGO in Dar Es Salaam.

The albino issue is a major problem in Tanzanian society and the albino people are under threat of violence, Davutoğlu stressed. According to a 2009 report by the International Federation of Red Cross and Red Crescent Societies, the market for body parts of persons with albinism was "generated by big-money buyers who use them as talismans to bring luck and, above all, wealth."

Another report from the U.N. High Commissioner for Human Rights, released in 2013, quoted senior police officers in Dar es Salaam confirming that "a complete set of albino body parts – including all four limbs, genitals, ears, tongue and nose – was fetching the equivalent of $75,000."

Many albino babies and children are abandoned by their families, and jilted albino children will be rehabilitated and receive medical treatment in the Albino Village.

The metabolic disorder is known as albinism and a patient of albinism is called an albino. According to official data, 15,000 albinos live in Tanzania.