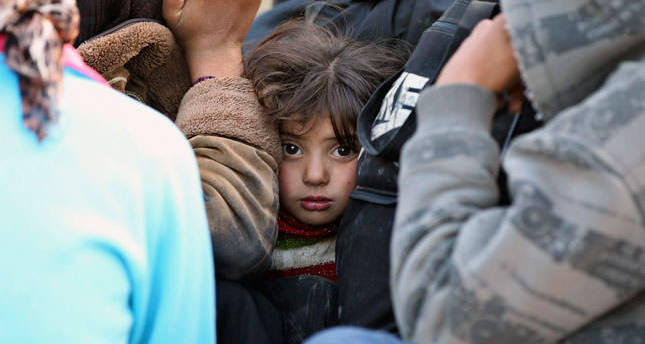 Natural or man-made disasters and wars have left many who have witnessed such events with debilitating mental disorders. Post-traumatic stress disorder (PTSD) is a lasting condition that commonly develops among the survivors of such traumatic events, and is on the rise in Turkey especially among Syrian refugees and in the mining towns of Soma and Ermenek

There are plenty of stories available on the psychological toll of natural or man-made disasters and wars that have left many with debilitating mental disorders. Those exposed to violence, terrorism, serious accidents, forced relocation or natural catastrophes such as earthquakes or hurricanes may experience strong emotional aftershocks or physical reactions even though they may not not be in danger. The survivors of such traumatic events commonly develop a condition known as post-traumatic stress disorder (PTSD), which is described as a mental health problem that may last for a few days or weeks or could even extend through months and years depending on the severity of the incident.

Certain neuropsychiatric disorders, notably PTSD, have come to the attention of psychologists in Turkey due to the high number of Syrian refuges taking shelter in camps and the recent coal mining disasters in the towns of Ermenek and Soma. Moreover, local news stations have reported about elevated levels of depression observed among the victims of the Syrian and Iraqi civil wars and families of the deceased miners.

Generally, patients diagnosed with PTSD struggle with extra stress followed by other symptoms such as night terrors, flashbacks, apprehension, changes in speech patterns, denial, poor attention and somatic complaints. Bedwetting and intense anger may also be seen in child survivors of disasters and traumas. More importantly, individuals with a history of trauma may suffer even more from life-long impairments in their social relationships.

Psychosocial rehabilitation addresses the abovementioned difficulties. To illustrate, the Turkish Psychologists Association and the Union of Psychosocial Services in Disasters have been organizing and conducting a project called the Soma Solidarity Network (SomaDa) where 242 volunteer mental health experts have been providing psychological support to 1,447 locals including disaster survivors and the family members of deceased miners for the past five months. Psychiatrists organize individual and group therapy sessions at social support centers and regularly visit homes. Similarly, the Family and Social Policies Ministry launched a psychological support initiative for children under 18 earlier this month in Ermenek. The psychosocial support program aims to reintegrate the traumatized individuals into society while offering consultation on positive parenting and domestic violence.

Aside from the disaster victims, war refugees have too become an increasingly important issue in Turkey – now home to more than 1.5 million Syrians. In May, Assistant Professor Gökay Alpak of Gaziantep University introduced his cross-sectional study on PTSD among Syrian refugees in Turkey to the American Psychiatric Association (APA). The APA's news release reported that the study analyzed "the prevalence of PTSD among Syrian refugees who sought asylum in Turkey and explores its relation with various socio-economic issues." The study was conducted in a Gaziantep tent city last year and revealed that the frequency of PTSD was 33.5 percent, while the probability of having PTSD among Syrian refugees in the sample was 71 percent. As it can be understood, depression is commonly seen among war victims who are living close together in crowded camps. The findings also suggest PTSD might be an especially alarming mental health crisis among female refugees "who were exposed to two or more traumatic events and had a personal or family history of psychiatric disorder."

An earlier study titled "Research on Syrian Refugee Children," which was conducted by Bahçeşehir University researchers in collaboration with the New York University researchers, was the first in its field. The study's findings demonstrated that almost 50 percent of refugee children living near the Syrian border suffer from clinical depression and 35 percent were found with PTSD.

According to psychological support professionals at the Disaster and Emergency Management Authority (AFAD), a significant portion of Syrian refugees in Turkey – slightly less among those in the camps – experience psychological problems. Additionally, almost one quarter of Syrian adult and child refugees living in camps develop sleeping disorders, a 2013-2014 AFAD survey reported. This figure is slightly less among adults and children in the camps. Considering their post-war psychosocial condition, 34 percent of refugees had fear reactions for six months as if the trauma was happening again. The psychological support professionals also told Daily Sabah that such reactions are still observed among the 14 percent of the surveyed refugees. Similarly, unwanted and recurring memories were identified in 29 percent of the refugees for six months.

Syrian adult and child refugees have also been offered psychosocial support including group therapy sessions and expert consultation. Although more refugees still require counseling services, a large portion of those who received mental health support were satisfied with the expert help and treatment.