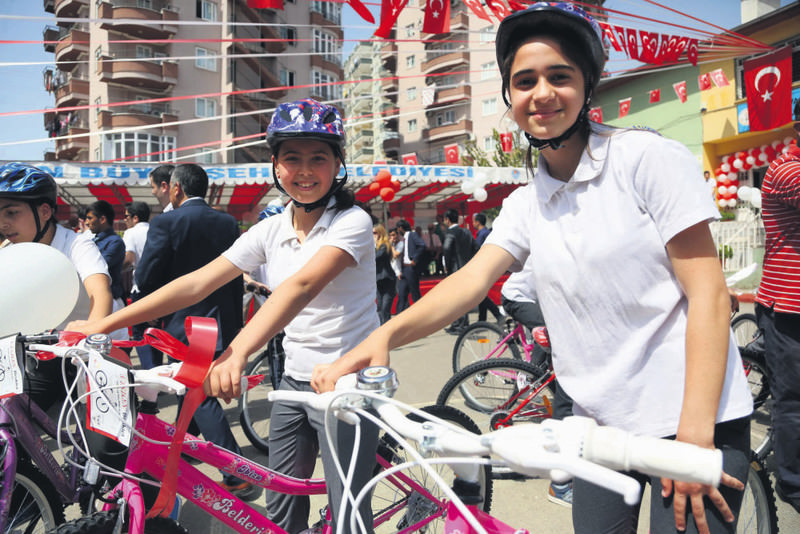 As part of the Healthy Nutrition and Mobile Life Program, bicycles have been offered to middle school and university students in Eskiu015fehir.
by Daily Sabah May 20, 2015 12:00 am

As part of healthy lifestyle projects, such as the Healthy Nutrition and Mobile Life Program and Physical Activity Promotion Project 2015-2018, bicycles have been distributed to students in Eskişehir, Adana and Samsun

As part of the joint project between the National Education Ministry and the Health Ministry, bicycles are now offered to middle school students in Eskişehir enrolled in the bicycle module in elective sports and physical education courses.

Taking the floor at the bicycle distribution ceremony during the Healthy Nutrition and Mobile Life Program, National Education Minister Nabi Avcı expressed his gratitude to Health Minister Mehmet Müezzinoğlu and ministry staff for their great efforts. Avcı said the bicycles are offered exclusively to schools. "Students will use the bicycles, and the number of bicycles will increase in the future. The ministry is working to allow students to use bicycles at schools," he said. He recommended students learn how to properly ride a bike, and said cycling is an important sports activity for better health.

Following his speech, 197 bicycles were offered to the schools that have the sports and physical education course for fifth, sixth and seventh graders. Additionally, 200 bicycles were given to Eskişehir Osmangazi University. The distribution was conducted with the support of the Public Health Directorate and the Provincial Directorate of National Education.

At another ceremony celebrating the launch of another agreement between the two ministries, 300 bicycles were presented to certain schools in the northern province of Samsun. Prior to their distribution, the head of the Provincial Public Health Directorate, Mustafa Kasapoğlu, said the World Health Organization (WHO) aims to remove barriers to physical activity and introduce efficient strategies to protect and improve health around the world. He said it is necessary to increase the level of physical activity among the public, notably children and adolescents. Kasapoğlu said regular physical activity is necessary for a healthy body, especially among children. "Children can decrease the risk of chronic diseases by playing sports and through healthy nutrition."

According to studies, 71.9 percent of people over the age of 12 in Turkey were found to live sedentary lifestyles while one out of four children do not get enough exercise and 56.8 percent of children generally spend their time on a computer instead of playing sports on the weekends. "Taking the studies into consideration, we should encourage the public to engage in more physical activity. We must also define strategies and remove all barriers that prevent people from playing sports," Kasapoğlu said, adding that walking activities are organized to encourage more people to get involved in physical activity.

Bicycles were also offered to students in Adana as part of the Physical Activity Promotion Project 2015 to 2018 initiated by the Health Ministry. Speaking at the ceremony to promote the project, Adana Governor Mustafa Büyük said they initiated the bicycle distribution project to place emphasis on youth and sports in collaboration with different institutions.

He said they aim to reach out to every segment of society with the project and stressed the importance of the efforts of various government institutions, especially local governments' efforts to create conducive environments and proper paths for cycling. Additionally, the chairman of the Parliament Committee on Health, Family, Labor and Social Affairs and Adana deputy from the ruling Justice and Development Party (AK Party), Necdet Ünüvar, said cycling is a very important activity for both health and the environment. Highlighting the need for less fuel consumption and more activity to prevent ozone layer depletion, Ünüvar said: "I hope local authorities will contribute to the Health Ministry's initiatives to fight obesity and bring up healthier individuals by building new bicycle paths and developing bicycle culture." Adana Director of Public Health Kadir Çağlar Çatak said they provided 500 bicycles for the first phase of the project and that they will distribute 500 more bicycles in the future. Çatak added that they acquired 250 bicycles from the National Education Ministry and 250 bicycles from Çukurova University with the aim of popularizing cycling and promoting healthy lifestyles.
Last Update: May 20, 2015 9:53 pm
RELATED TOPICS