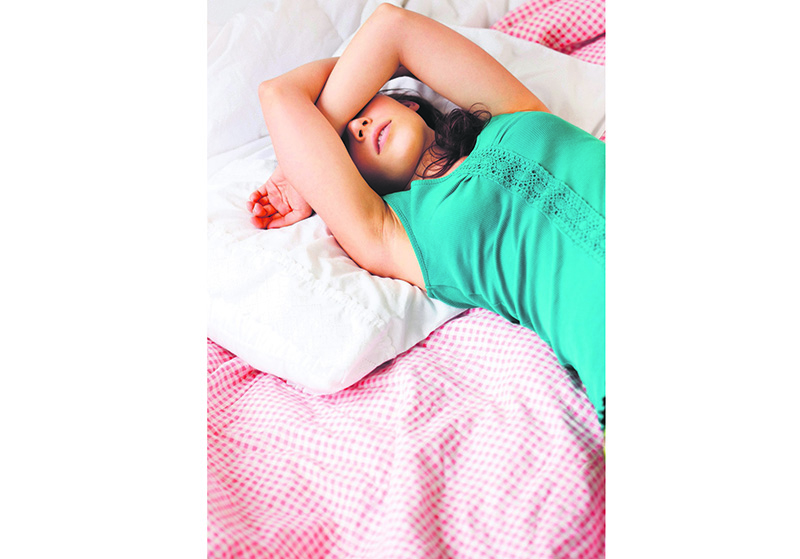 Exhausted teenage, girl sleeping on bed (Image by u00a9 Tetra Images/Corbis)
by Jun 02, 2015 12:00 am
People who have trouble falling or staying asleep at night shouldn't use the bedroom as a workroom since that makes it harder to unwind in the evening, a German expert points out.

The tip is one of several by Martina Riepold, a non-medical practitioner and relaxation technique instructor, in the latest issue of the German monthly health magazine Naturarzt ("Naturopath")

Also helpful for a good night's sleep, Riepold says, are regular bedtimes with deviations of no more than a half-hour. During the day it's advisable to limit naps to 10 or 20 minutes, and to be active and get plenty of exercise, which makes it easier to relax at day's end.

People who watch television in the evening would do well not to doze off. It's also best to avoid the blue light emitted by computer, tablet and smartphone monitors for a minimum of two hours before going to bed, Riepold writes.

Alcohol should be avoided as well. Though helpful in falling asleep, even moderate amounts of alcohol can be a hindrance to uninterrupted, restful sleep.

If good sleep habits don't seem to help, then it's better to get up and occupy yourself with something rather than tossing and turning for hours in bed, according to Riepold, who says the clinical definition of insomnia is having trouble falling and staying asleep, along with waking up very early and sleeping poorly, for at least three times a week for a month.

The causes of insomnia can be psychological - such as work- or relationship-related stress - or physiological, such as diabetes or an overactive thyroid gland. The first step in treating insomnia is finding the cause.