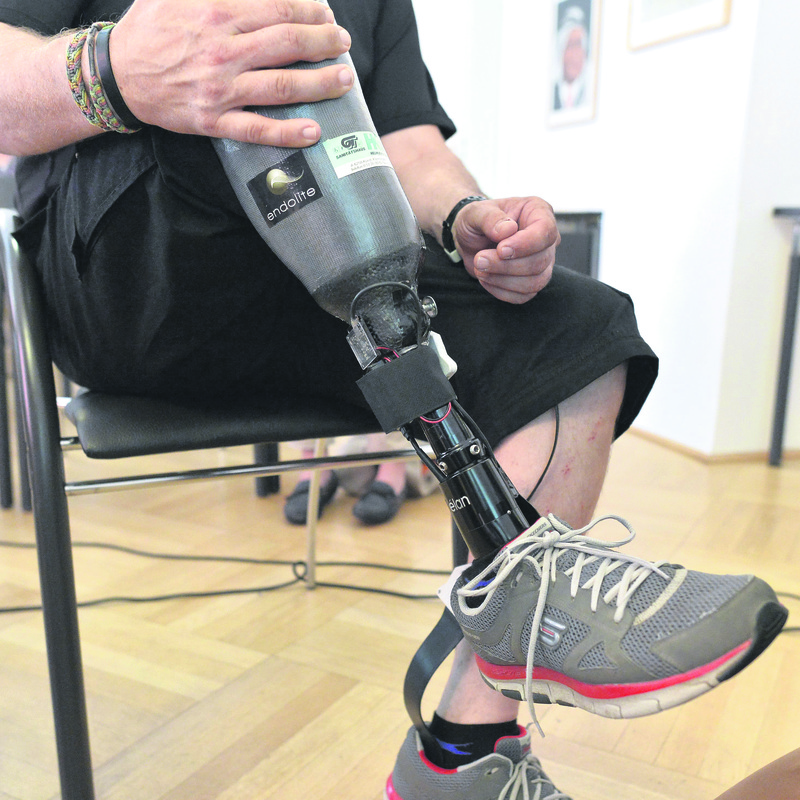 by Jun 09, 2015 12:00 am
The world's first artificial leg capable of simulating the feelings of a real limb and fighting phantom pain was unveiled by researchers in Vienna on Monday. The innovation is the result of a twofold process, developed by Professor Hubert Egger at the University of Linz in northern Austria.

Surgeons first rewired the remaining nerve endings from a patient's stump to healthy tissue in the thigh, placing them close to the skin's surface. Six sensors were then fitted to the foot sole of a lightweight prosthesis, and linked to so-called stimulators inside the shaft where the stump sits.

"It's like a second lease on life, like being reborn," Austrian amputee Wolfgang Rangger told AFP ahead of Monday's media launch. The former teacher, who lost his right leg in 2007 after suffering a blood clot caused by a cerebral stroke, has spent the last six months testing the new prosthesis. "It feels like I have a foot again. I no longer slip on ice, and I can tell whether I walk on gravel, concrete, grass or sand. I can even feel small stones," he said.

The 54-year-old also runs, cycles and goes climbing. When he moves, a limp is barely noticeable.

Every time Rangger takes a step or applies pressure, the small sensor devices send signals to his brain. "In a healthy foot, skin receptors conduct this function but they are obviously missing here. However, the information conductors - the nerves - are still present, they're just not being stimulated," Egger said. "The sensors tell the brain there is a foot and the wearer has the impression that it rolls off the ground when he walks. All things considered, the procedure is a very simple one given the results."

This is not the first time the Austrian scientist has caused a stir with his research. In 2010, he presented a mind-controlled prosthetic arm, which the user directed with motor neurons previously connected to the lost limb. For the artificial leg, the principle remains the same except that the process works in reverse: Information is guided from the prosthesis to the brain, rather than the other way around.

In addition to increasing balance and safety, the prosthesis provides another remarkable function: It has helped eradicate the excruciating pain Rangger had experienced for years following his amputation. "I was barely able to walk with a conventional prosthesis; I didn't sleep for more than two hours a night and needed morphine to make it through the day," he said. But within days of undergoing the operation last October, the pain vanished. As Egger highlighted, phantom pain occurs because the brain gets increasingly sensitive as it seeks information about the missing limb.

"Plus the amputation is often tied to a traumatic experience like an accident or illness, and the mind keeps reliving these memories," he said. The advantage of the "feeling prosthesis" is that the brain once again receives real data and can stop its frantic search.

"Rangger is a very different person now to the one I met in 2012," Egger said. The two men were introduced to each other at a support group for amputees. "It struck me that he never laughed and he had these dark rings under his eyes. It was awful." Importantly, post-surgery recovery is quick and there are no known health dangers associated with the intervention, he added. "The only risk is that the nerves don't reconnect properly and the feelings fail to return," he said.

With the new technology ready, Egger now hopes that small companies will join his venture and start building the prosthesis to help bring down the market price. At the moment, a high-tech foot model costs between 10,000 euros and 30,000 euros.

Egger believes his latest project could vastly improve the quality of life for amputees, including in developing countries. "People with amputations aren't patients in the traditional sense, they aren't sick - they're just missing a limb," he said. "By giving them back mobility, they also regain their independence and are able to reintegrate into society. That's what I work for."
Last Update: Jun 09, 2015 1:14 am
RELATED TOPICS