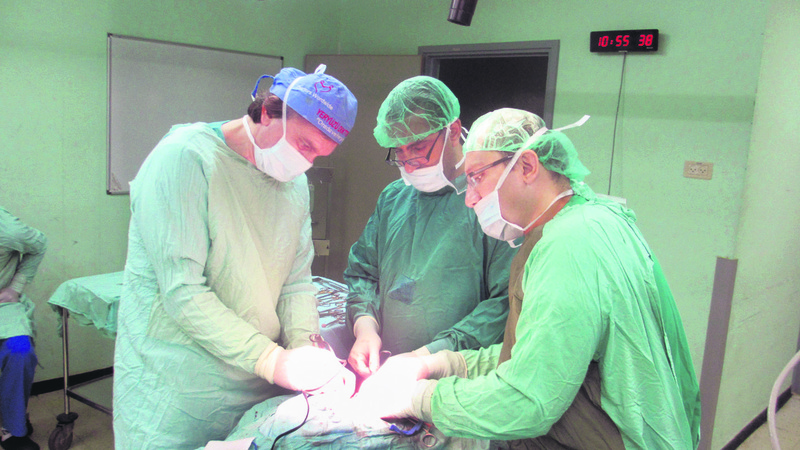 Lending a helping hand to people living in Gaza and Palestine, Doctors Worldwide has opened two physical treatment and rehabilitation centers with one in Gaza and the other in Khan Yunis, in collaboration with Turkey's Cooperation and Coordination Agency

Doctors Worldwide (Yeryüzü Doktorları) recently opened a physical treatment and rehabilitation laboratory in Gaza and a physical treatment and rehabilitation center in Khan Yunis as part of its joint project with Turkey's Cooperation and Coordination Agency (TİKA). Established in only six months at a cost of around $311,000, the two new centers are equipped with state-of-art rehabilitation technology and will provide free health services to 10,000 patients within two years. With support from TİKA, the center in Khan Yunis began to provide health services this month with laboratory equipment provided by the Thai Islamic Medical Association (TIMA). The high-tech center can provide services for up to 450 people.

Since 2007, Doctors Worldwide has offered equipment assistance to the region. In the Gaza Strip the initiative opened the Nasser Surgery Trauma Center in collaboration with the Deniz Feneri Association. The center was equipped with tomography, ultrasound, X-ray and mammogram technologies. They also sent $233,000 worth of emergency medical material support to the Al-Shifa Hospital in Gaza. Four ambulances, one of which is for intensive care, were also sent to the hospital. Two years later, Doctors Worldwide donated various medical consumables, including mobile surgical microscopes, an arthroscopy and Phaco instrument to Al-Shifa, Nasser and the European Gaza Hospitals. A series of training sessions were also provided to teach the use of equipment. $200,000 of donations was provided to develop the region's microsurgery capacity. During the Israeli offensive in 2014, the initiative sent medicine worth $1.4 million as emergency aid to the Gaza Strip.

Aside from health service activities in Gaza, Doctors Worldwide offered advanced diagnosis and treatment training sessions on physiological trauma to mental health experts based in Palestine. Doctors Worldwide has focused on emergency health services due to the continuous violence in the region and rehabilitation after the attacks. From 2007 to 2013, 16 volunteer health service groups were active in Palestine and nine of them were based in Gaza. In these camps, 662 operations and 2,280 physical examinations were carried out by 108 physicians and 131 volunteer health professionals in the fields of plastic surgery, general surgery, brain surgery, orthopedics and otorhinolaryngology.

Doctors Worldwide continues to provide health services to Palestinians and support them. Health services will soon be provided to those who were injured or disabled as a result of the latest Israeli offensive. Comprising 39 members, five mobile teams, including nurses, physicians, physical therapists and psychologists will treat patients for two years. Throughout the project, almost 2,000 patients are expected to receive treatment. Doctors Worldwide will also realize some health education projects following the agreements with Al-Shifa Hospital, the Palestinian Ministry of Health and the Islamic University of Gaza.
Last Update: Jun 12, 2015 12:04 am
RELATED TOPICS