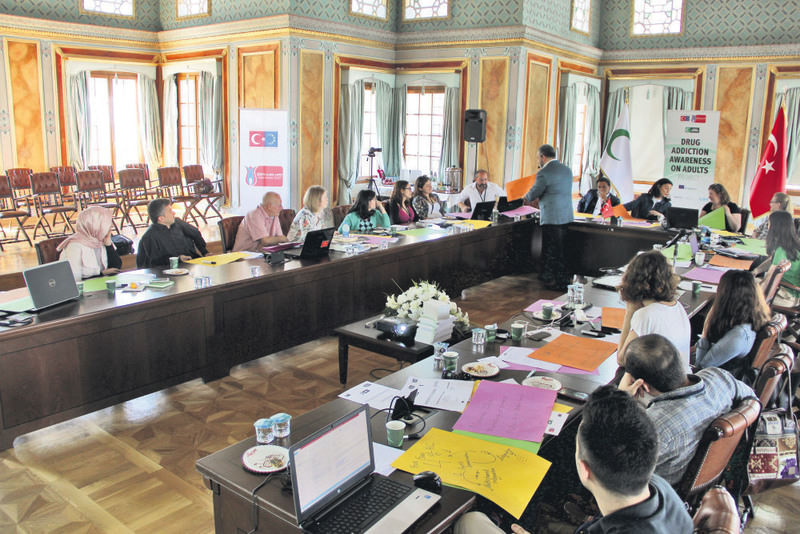 by Daily Sabah Jun 14, 2015 12:00 am
The Turkish Green Crescent Society (Yeşilay) is conducting the project "Drug Addiction Awareness on Adults" (DAWAP) to improve public health communication to fight against drug addiction. With its international nongovernmental organization (NGO) partners from Portugal, the Netherlands and Lithuania, the project is organized in partnership with the Turkey's Ministry of European Union National Agency and supported by the Istanbul Provincial Public Health Directorate.

Project trainings were conducted in Turkey and the project's program includes public health communication trainings and surveys to be conducted among parents in partner countries. The Green Crescent Society believes the project will fill an important void in both Turkey and Europe in the field of drug addiction, and public health communication takes an important role in this regard. As part of the project, international field studies, staff trainings, study meetings and a competition will be held. The second training program will take place in Lithuania from June 7-12. The project program has three sections, trainings, preliminary tests and focus group meetings, and includes three surveys in partner countries. The surveys will be conducted among parents with children who are between 10 and 18. The survey's topics focus on how parents protect children from drug addiction, inform them about drug addition, the names of drugs and their dangerous affects, how parents find out their children use drugs and what should be done in the case of drug addiction among children. Following the trainings, a workshop will be held in Turkey to create a public health communication strategy with the findings in partner countries. The third phase of the project is a competition aiming to raise awareness about drug addiction among youth. Announcements will be made at universities' communication faculties and youth groups in partner countries. Students can participate in the competition with videos, posters and social media campaigns. Following the assessments, a jury committee will select winners from each country and a winner will be chosen among all the entries. The project will also evaluate the effects of media campaigns. All participants from partner countries will follow social media and outreach campaigns along with advertisements and public service announcements, and work to extend their influence on drug addiction awareness.

Vaida Liutkute, a member of NTAKK, a Lithuania-based NGO that conducts important studies on alcohol addiction and smoking, said in a statement that the Turkish Green Crescent Society has an expert team that makes the project more valuable. Liutkute said the project focuses on what kind of a communication language should be established to prevent drug addiction and what the priorities are while imparting a message to the public. Fay Watson, the general secretary and the Netherlands representative of EURAD, a European NGO that advocates for a prevention-oriented drug policy at the national and international level, said, "The cooperation allows the partner countries to increase awareness among families to fight against drug addiction and fulfill their requirements."
Last Update: Jun 14, 2015 11:51 pm
RELATED TOPICS