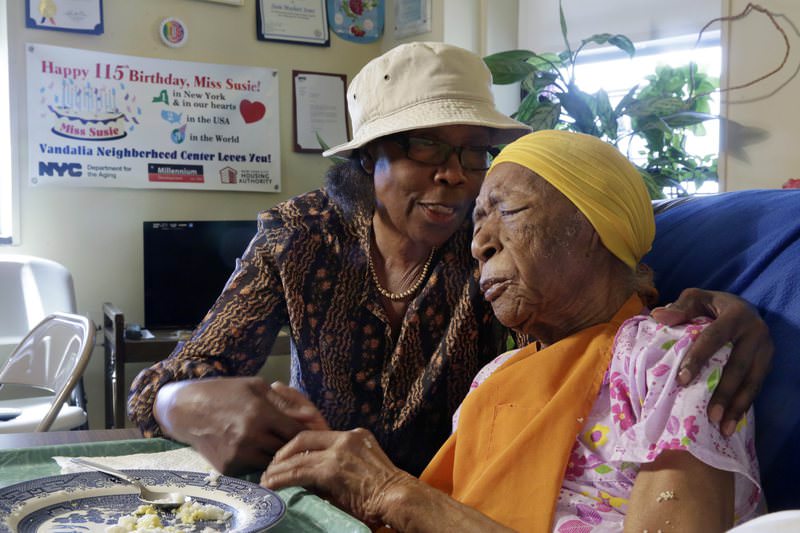 In this Monday, June 22, 2015 photo, Susannah Mushatt Jones, 115, right, is embraced by her niece Lois Judge in her room at the Vandalia Avenue Houses, in the Brooklyn borough of New York. (AP Photo)
by Daily Sabah with Reuters Jul 07, 2015 12:00 am
Susannah Mushatt Jones, the world's oldest living person, celebrated her 116th birthday on Monday in New York.
Mrs. Jones marked the occasion privately with family but a public celebration is planned for Tuesday, according to the Gerontology Research Group.

Jones, born in Alabama in 1899, was the daughter of sharecroppers and granddaughter of slaves. After she graduated from high school, she moved north in 1922 to New Jersey and then to New York, where she worked as a housekeeper and childcare provider, according to the Guinness World Records and the Vandalia Senior Center in the New York City borough of Brooklyn.

Living in Brooklyn, Jones retired in 1965. She says lots of sleep is the secret to her longevity, Guinness said in confirming her status as the oldest living person. She also said she never smoked or drank, according to Senior Center officials.

She also wrote a book called "Susannah Our Incredible 114-Year-Old Aunt," which includes her African-American and Native American ancestry.

Although she never had children, she has more than 100 nieces and nephews. When asked about her husband, according to the nursing home, she says: "I don't know what happened to him."

Jones inherited the title of world's oldest living person after Jeralean Talley's death in Michigan on June 17, who was also 116.

The world's second oldest person is Emma Morano-Martinuzzi, a 115-year-old woman living in Italy, according to the Gerontology Research Group.

The oldest verified person was Jeanne Calment of France, who died in 1997 at 122 years and 164 days, Young said.