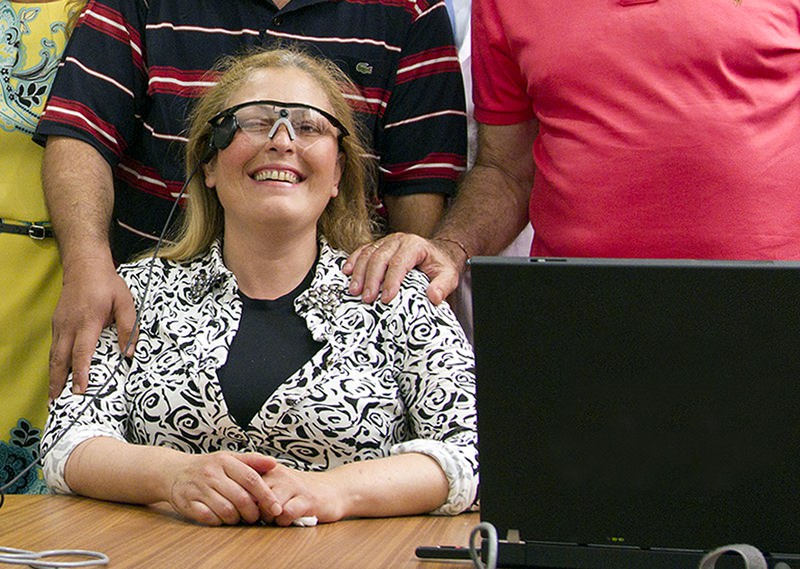 | AA Photo
by Daily Sabah Jul 13, 2015 12:00 am
The first bionic eye operation done in Turkey, using the "Argus II" system, has been performed on Dilek Ümran Öztürk at the Dünya Göz Hospital.

The operation was done by Professor Ioannis Pallikaris, the inventor of the Lasik procedure, and Associate Professor Doctor Nur Acar and Surgeon Fevzi Akkan. Dilek Ümran Öztürk, aged 44, was the first patient in Turkey to undergo such an operation and only about 150 patients have had the operation worldwide.

Mrs. Öztürk, who had retinitis pigmentosa (widely known as night blindness) had lost her eyesight 20 years ago when she gave birth to her second daughter. Öztürk said that she could only differentiate between light and dark, day and night for the past 20 years and hoped that would be able to see her younger daughter, whom she has never seen.

After undergoing the Argus II operation Öztürk started to recognize not only objects and their outlines but also she was finally able to see her daughters. The doctors said that the rehabilitation process will lead to a speedier recovery.

Professor Pallikaris stated that Mrs. Öztürk was chosen among 800 patients and was the best fit for the operation. He underlined that medical and assistant teams were very important in the Argus II surgery and they owed their success to the experienced staff and technological infrastructure of the Dünya Göz (World Eye) healthcare group.

The doctors who took part in Turkey's first ever bionic eye operation also added that they were proud to be part of such a team and said that the 'Argus II' retinal implant procedure will give hope to other visually impaired patients in Turkey.
Last Update: Jul 13, 2015 2:02 am
RELATED TOPICS