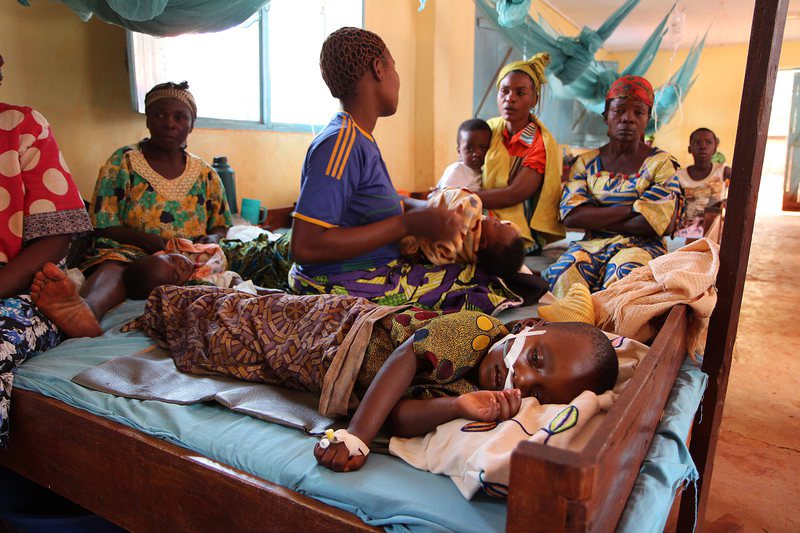 | AFP Photo
by Anadolu Agency Jul 16, 2015 12:00 am
The Health Ministry of Uganda has announced that the malaria outbreak in the country has killed 162 people - mostly women and children under the age of five – in the last three months alone.

An increase in the number of hospital admissions and outpatient reports in the 10 districts has amounted to more than 22,000 cases to date in the health facilities and in the communities.

"Data so far collected indicates that Kitgum is the most affected district with 5,382 infections and 22 deaths," she reveals.

In order to ensure effective treatment of cases anti-malarial medicines including second line antimalarial drugs, medicines for sever malaria and other supplies are being delivered to the districts on a continuous basis.

Aceng adds that health facilities have been receiving thousands of units of blood.

Aceng says the Ministry of Health has confirmed that, this recent outbreak had occurred because indoor residual spraying ended last October, hence the increased proliferation of mosquito bites.

The Ministry of health is now planning to conduct at least two rounds of indoor residual spraying to cut malaria transmission.

"The northern region has always had the highest prevalence of malaria in the country, " notes Albert Okwi, the country malaria control program manager.

But in order to rid the area of malaria Okwi stresses the need to combine a number of measures including, prevention, treatment, surveillance and health promotion. "Over time, we should be able to move towards elimination."

A 2014 malaria indicator survey showed that Uganda's prevalence rate had reduced to 19 percent, down from 42 percent in 2009.

Malaria is still the most lethal disease in Sub-Saharan Africa.

According to the World Health Organization, there were an estimated 198 million cases of malaria worldwide in 2013, and an estimated 584,000 deaths. 90 percent of all malaria deaths occur in Africa.

In 2013, an estimated 437,000 African children died before their fifth birthday due to malaria. Globally, the disease caused the deaths of an estimated 453.000 children under five the same year.