What price for keeping cool? 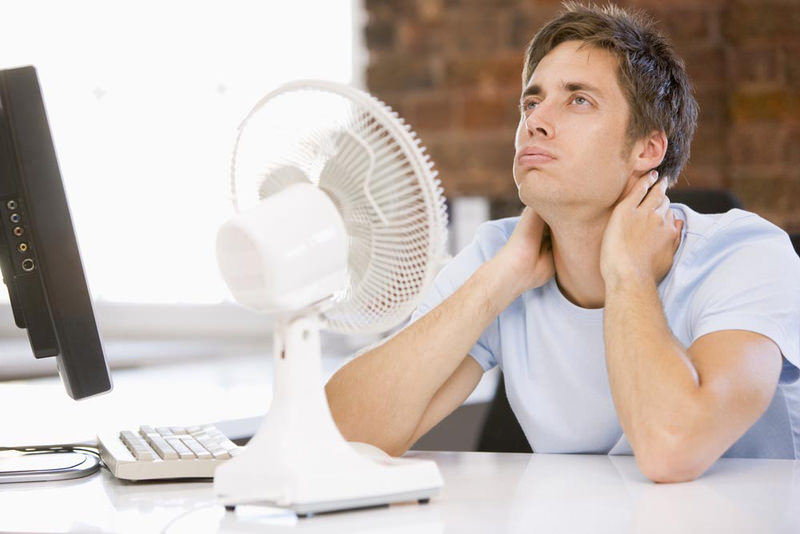 by Nilay Onum Kar Aug 07, 2015 12:00 am
Air conditioning- that 20th century revolution in thermal comfort - was intended to make life bearable in hot weather. As Turkey has been melting in extreme heat for two weeks, many people have invested in air conditioners to cool off - but an unexpected side effect has been a rise in health problems and workplace bickering.

Socially, it has become something of a "silent war in sweltering offices," according to one Turkish worker. Throat infections, colds, bronchitis, muscle pains or cricks in some parts of body have been triggered by the extremes of heat and cold, according to some Turkish health experts.

"I've seen so many patients who suffered upper respiratory infections this summer. They were almost all saying that they spent so much time in front of air conditioners," says Dr. Lütfü Tanverdi, an internal medicine specialist at Istanbul's Şafak Hospital.

"According to my own observations, there has been around a 60 percent increase in these kinds of patients this summer, compared to last summer," he adds. Dr. Özgür Karcıoğlu, an emergency physician, also blames the unconscious usage of air conditioners for the increase in ailments.

"When we ask patients suffering from bronchitis, for example, if they used air conditioning or slept in front of an air conditioner, they generally answer 'yes'," he says.

Over the last two weeks, temperatures have soared to between 5-8 degrees Celsius above the seasonal average across Turkey. The highest temperature so far was 46 degrees Celsius in the southeastern provinces of Mardin and Şırnak, Ahmet Uçar, Weather Forecasts Desk Manager of the Turkish State Meteorological Service tells Anadolu Agency.

Twenty-six-year-old Sinem Koç, a shoe designer in Istanbul who caught a cold recently because - she says - of air conditioning, says there is a "silent war" in her workplace over adjusting the temperature.

"We are turning off the air conditioners when we are cold but there are some people, generally men, would like to turn it on as they are sweating," she says. She and her colleagues had an unusual remedy, considering Istanbul is in a heat wave: "We who are feeling chilly found a solution by bringing sweaters with us to the office," Sinem says.

"I am disturbed by the high temperatures and air conditioning at the office," says Emine Doğan, 30, a human resources employee. "If we set it at around 25C instead of 18C it would be no problem, but as some people's metabolisms are different from others, they may want to increase it - then we get sick."

A new study by Dutch researchers suggests that the majority of climate-control systems in modern offices are designed for the metabolic rate of a 40-year-old man weighing 70 kilograms - totally out of sync with the female metabolic rate.

This is the reason given for why women apparently prefer lower temperatures than men, according to the study from the Netherlands-based Maastricht University.

However, it is not all bad news.

"As air conditioners cool the weather, it can offer comfortable temperatures for blood pressure or cardiac patients who are particularly disturbed by extreme heat," Dr. Tanverdi says. Stating that infants and the elderly are more vulnerable to extreme cold, heat or sudden climatic changes, health experts are warning everyone to avoid sitting too long in artificially cold air. "Not so much time should be spent in front of a simple ventilator," Karcıoğlu says, adding: "Air conditioners should not blow directly onto people." "Extreme temperatures should not be set to cool off and people should avoid sudden temperature changes," Tanverdi adds.

As Turkey's Meteorological Service expects 5 degree Celsius higher temperatures than the seasonal average across the country by Aug. 15, it seems heat-related difficulties will continue. Nevertheless, despite the conflicts, some Turks have been having fun with the disputes. Online satire site Zaytung.com recently published a spoof story saying Turkey's "seasonal" air-con wars had begun across all the country's offices "with joyful celebrations."
RELATED TOPICS