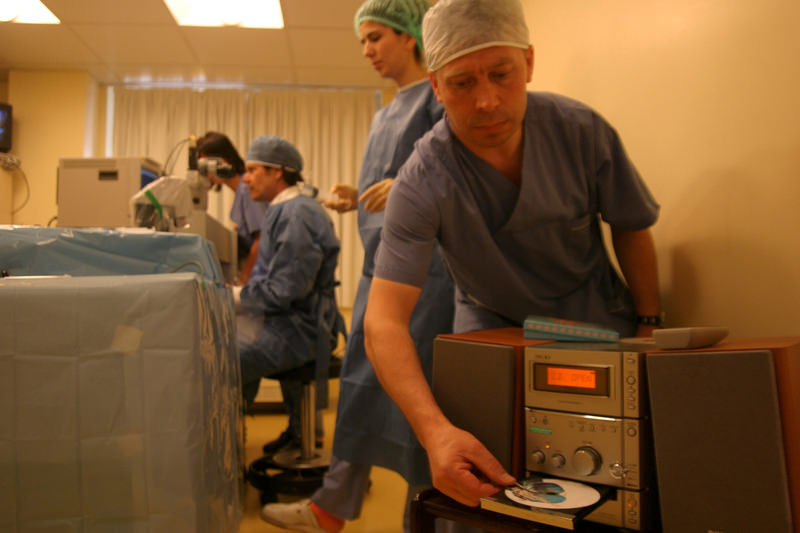 by Aug 17, 2015 12:00 am
Listening to music before, during and after surgery reduces patients' pain, eases anxiety and lessens the need for painkillers, British scientists said last week. After reviewing evidence from around 7,000 patients, the scientists said people going for surgery should be allowed to choose the music they'd like to hear to maximize the benefit.

But they also warned that the music should not interfere with the medical team's communication during an operation. "Music is a non-invasive, safe, cheap intervention that should be available to everyone undergoing surgery," said Catherine Meads from Brunel University, who co-led the research. The team conducted a meta-analysis of all published randomized trials looking at how music compares with standard care or other non-drug interventions such as massage and relaxation in effecting recovery of adults after operations.

The results, published in The Lancet journal, found patients were significantly less anxious after surgery and reported more satisfaction after listening to music. They also needed less pain medication and reported less pain compared with controls.

While the study found listening to music at any time seemed effective, there was a trend for better outcomes if patients listened to music before surgery rather than during or after.

And when patients selected their own music, there was a slightly greater reduction in pain and in use of pain relief.

"We have known since the time of Florence Nightingale that listening to music has a positive impact on patients during surgery, by making them feel calmer and reducing pain," said Martin Hirsch of Queen Mary University of London, who co-led the work. "However, it's taken pulling together all the small studies ... into one robust meta-analysis to really prove it works."

Paul Glasziou of Australia's Bond University said the results held a clear message: "Music is a simple and cheap intervention," he wrote in a comment in The Lancet. "A drug with similar effects might generate substantial marketing." The team now plans to follow up with a pilot scheme introducing music at The Royal London Hospital for women having Caesarean sections and women having hysteroscopy. Patients will submit their playlist on a device of their choice to be connected to a pillow with inbuilt loudspeakers, and the researchers will then analyze the effectiveness of rolling this out in practice.