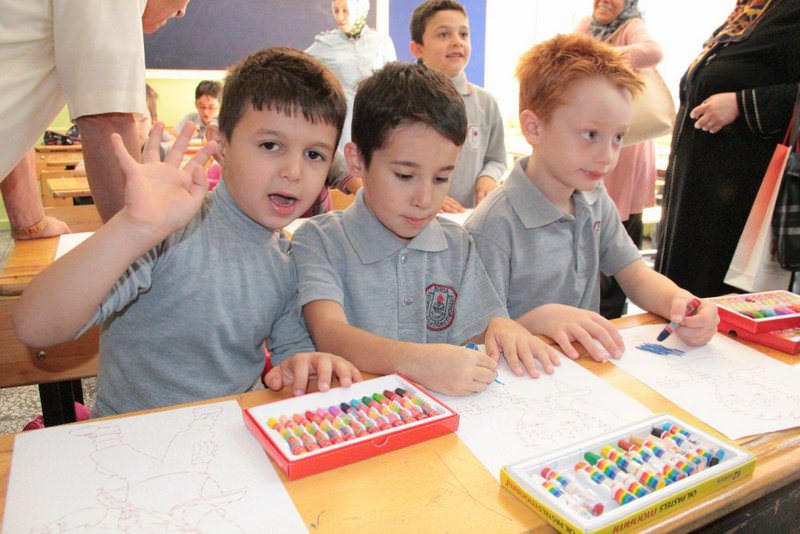 Children should be able to go outside during breaks as well to get fresh air, and classrooms should be ventilated between classes.
by Halit Yerebakan Aug 26, 2015 12:00 am

Infectious diseases are a danger to men and women of all ages. Especially people in places such as schools and workplaces where we come into close contact with each other should be extra cautious to protect themselves

The school environment is extremely effective at spreading infectious diseases where it is full of children whose immune system has not yet sufficiently developed. It is not enough to just protect children, though. School staff and employees must also take the necessary measures. It is of course not only where children are and where you work, but indoor areas with artificial climate control are also dangerous zones when infectious diseases are more likely to spread. One study showed that even airplanes, where the climate control is fully managed by air conditioning compressors, is actually a real threat to people if they don't take personal immune defense measures. The same study went on to state that people who fly run the risk of contracting a common cold infection.

The contagiousness of infectious diseases varies according to the type of microbe (virus, bacteria or fungi). Although it is possible to be protected from some, the more insidious the pathogen is the harder it gets to avoid being infected.

Upper respiratory tract infections such as pharyngitis, sinusitis and the common cold are airborne diseases and are spread by coughing and sneezing. Therefore, if you have a disease with symptoms of coughing and sneezing, try not to go to work or school since then it will be your first duty to protect others and not catch a secondary infection (called a superinfection). If you encounter sick people who don't think of others' health and continue to enter crowded environments, try to stay away and don't have close contact with them while also avoiding using common items.

Also, outside of contracting an upper respiratory tract infection through the use of a common toilet, parasitic infections are easily transmitted from person-to-person. Do not use public toilets where it is not possible to ensure their cleanliness. I wrote earlier in one of my previous articles on the secrets of restaurants, I wrote that the bins are where you should look first when you enter the bathroom. If the bucket is more than half-way full, walk away immediately. This means that the toilet has not been cleaned at appropriate intervals and if the toilet bin is not cleaned appropriately, how could you be sure about the kitchen? It is not possible to find full garbage cans in an environment where regular cleaning is done.

Other dangerous infections that are easily transmitted from person-to-person are skin infections, especially fungal ones. Such infections are transmitted by direct contact in general. Contact does not necessarily mean direct skin-to-skin touching. Using common objects also plays an important role in the transmission of such infections.

Upper respiratory tract, skin and parasitic infections are tough to hide, so it is generally easy to treat them. There are also infections that are unresponsive or don't give any clues during their incubation period, which I call insidiously spreading infections. Examples to these include mumps, chicken pox and whooping cough. During the incubation period of such diseases, they are not taken seriously in the first place – as the signs they give are only a mild fever, mild cough and fatigue. This is why children with a disease in the incubation period spread the disease by continuing to go to school. And generally it is too late when the disease's main symptoms are seen.

Every child will get sick; in fact, this shows that the child's development is healthy and on track. When forced to fight simple infections, the immune system is strengthened. Fully grown children in isolated environments are much weaker than those growing up on the streets, and despite being confronted with the same infection, the former have a more difficult time overcoming disease.

Periodic infections break out from time to time all around the world, and they also travel between continents, countries and cities. Swine flu, bird flu and hepatitis are among the best examples. When there are such outbreaks, then there should be a health taskforce at schools and workplaces. They should closely follow all customers, students and employees. The first thing to do is to suspend people who are showing signs and symptoms of a disease.

Good hygiene at schools and in the workplace is also important. The number of students in a classroom should be closely monitored, and teachers and principals should be careful not to have overcrowded classrooms. Children should be able to go outside during breaks as well. It is important for children to be outside to get fresh air, and classrooms should be ventilated between classes. The toilets should be cleaned at timely intervals, and children must be given toilet training because the handles of toilets, sinks and faucets are some of the most unhygienic parts of a bathroom where diseases can easily be transferred.

For travelers, hand washing is very important. Instead of using wet wipes, washing your hands with soap and water is the gold standard for protection. On the other hand, if you are traveling by plane, you should consume more than the usual amount of water so that your mucosal surfaces can work to trap microbes entering your respiratory tract.
Last Update: Aug 26, 2015 2:17 am
RELATED TOPICS