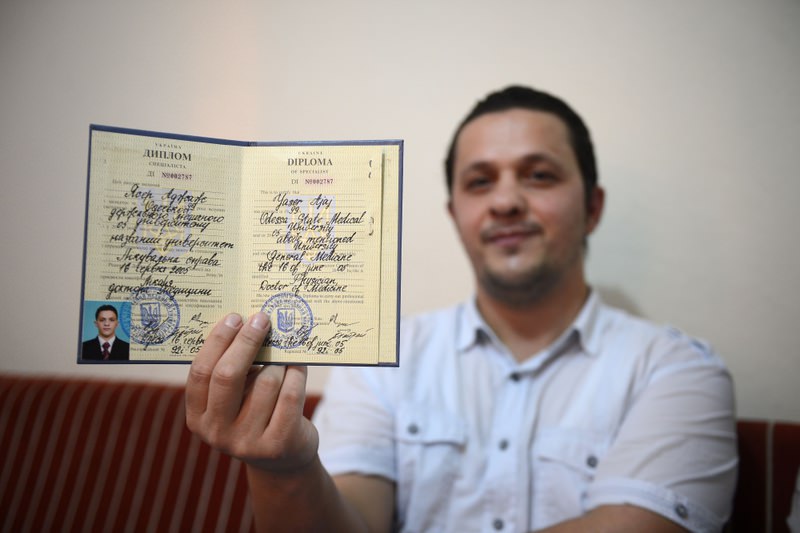 by Anadolu Agency Sep 09, 2015 12:00 am
Physician Yaser Muhammed Ajaj, who is fluent in six languages, fled from Syria due to the ongoing civil war and took refuge in Turkey. Although he struggles due to not being able to practice his profession, he does everything he can, including working in construction, to support his family. Ajaj, who practiced medicine in Aleppo before the civil war began, talked to Anadolu Agency (AA) at his home in İzmir's Gümüşpala district.

Ajaj said he returned to Syria following his medical training at Odessa State University in Ukraine, and began working as a volunteer in Aleppo after the civil war broke out. However, he decided to come to Turkey after his home was destroyed.

Ajaj put his profession aside and started a new life in İzmir. He married his wife Ravia in İzmir, and his son Muhammed was born shortly after, which instilled Ajaj with more will to stay alive.

As he cannot currently practice his profession in Turkey, Ajaj began working different jobs regardless of the line of work. He said he speaks Turkish, Arabic, Russian, English, Latin and Ukrainian, but it is hard to find a job even with all his qualities.

He said he works for TL 20 ($6.62) a day, and continued: "When I first arrived in Turkey, I had some money and gold. However, all of that dries out quickly. I came here and built a new life; I rented a house but then I needed money for that as well. I worked in construction, as a salesman in a clothing store in Kemeraltı and I sold çiğ köfte in Bornova. Then I went to the Selçuk district of İzmir and worked as a real estate agent. I am doing anything to provide for my family, but I deeply want to practice my profession."

He said he does not want to go to Europe because of their mindset about Muslims. Ajaj added that he will get an equivalency certificate from the Council of Higher Education (YÖK) in Turkey so he can work as a doctor, adding he closely follows the latest developments in health and medicine.
RELATED TOPICS