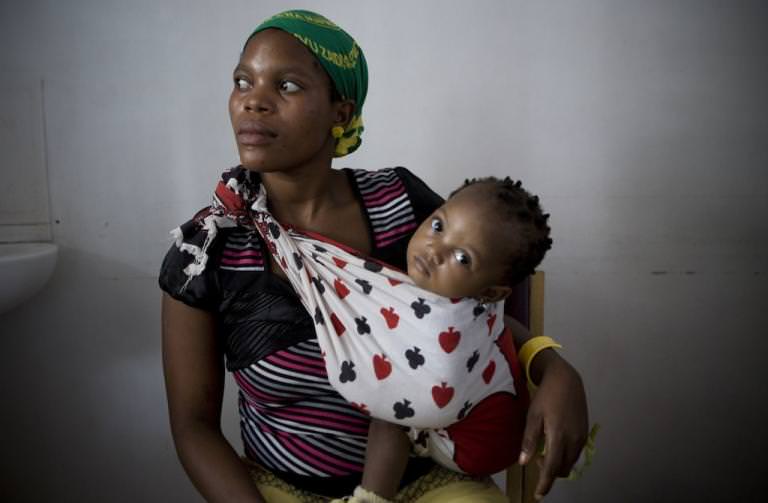 A woman and her child at the Mbagala Rangitatu clinic in Dar Es Salaam, Tanzania on April 4, 2011 (AFP Photo)
by reuters
Oct 13, 2015 12:00 am
T anzania has launched a nationwide drive to help parents register their children's births by mobile phone so the government can better plan health, education and other public services.

The country has one of the lowest rates of birth registration in eastern and southern Africa. Some 80 percent of Tanzanians - and more than nine in 10 under-fives - do not have birth certificates, according to the 2012 census.

Most parents in rural areas of Tanzania do not register their children because of the steep cost, long distances to registry offices, cumbersome process and lack of awareness of the benefits.

Parents have to pay 3,500 Tanzanian shillings ($1.6) if they request a birth certificate within 90 days of a child's birth, or 4,000 shillings afterwards, as well as travel costs - a high price in a country where many rural people live on less than $1 a day.

The new system being rolled out across the country over the next five years allows a health worker to send the baby's name, sex, date of birth and family details by phone to a central data base and a birth certificate is issued free of charge in days.

The initiative - already operating in 10 of the country's 26 regions - is run by the government registration agency RITA, UNICEF and telecommunications company Tigo.

The government expects to register about a million children under the age of five before the end of this year, and 90 percent of all newborns within the next five years.

Anna Mbelwa, who gave birth to a baby boy at Mbalizi hospital in the southern Mbeya region this month, said the initiative made a big difference.

"I was very impressed because it usually takes a long time to get a birth certificate," she told the Thomson Reuters Foundation. "It was very inconvenient before since parents had to travel a long distance to the district registrar only to be told their children's files were missing."

Globally, around 290 million children do not possess a birth certificate, according to UNICEF. Without one, they can face problems later in life if they want to enrol in university, find employment, buy property, access justice or get a passport.

"I will make sure that all my children have their birth certificate, it is very important for their future," Mbelwa added. "At the hospital every delivering mother was quite eager to get a birth certificate, they certainly know its importance."
Last Update: Oct 13, 2015 6:55 pm