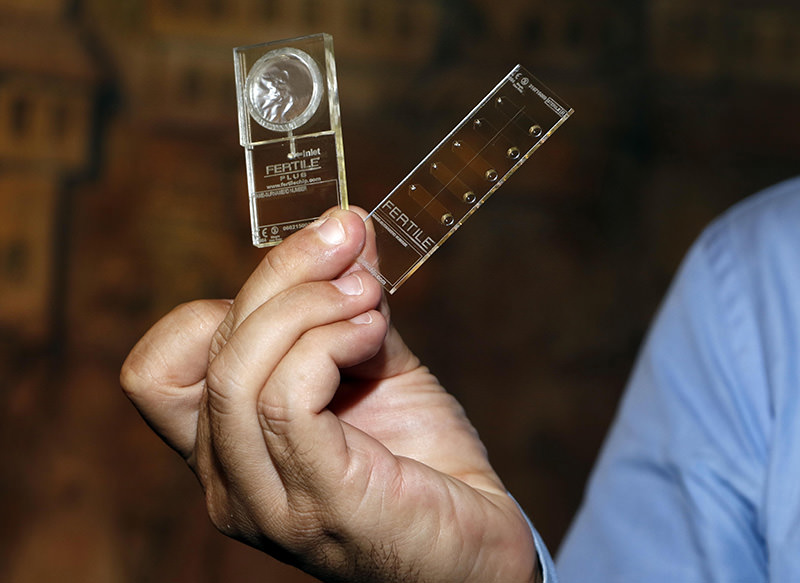 | IHA photo
by Daily Sabah Nov 03, 2015 12:00 am
A device created by two Turkish scholars which races sperm through a microscopic obstacle course to select the ones most likely succeed in fertilizing an egg, has increased the fertility rate from 30-35 percent to 70 percent, according to a co-founder of the company producing these microchips, Dr. Selçuk Kılınç, who spoke on Tuesday at a medical conference.

A novel research collaboration between two Turkish scholars, Erkan Tüzel, an assistant professor of physics at the Worcester Polytechnic Institute, and Utkan Demirci, an associate professor at Stanford University School of Medicine, has led to creation of a device which selects the sperms that are most likely to successfully fertilize an egg and therefore increases the fertility rate in IVF (in vitro fertilization) treatment.

In vitro fertilization (IVF) is the most widely used assisted reproductive technology and can help overcome problems with male fertility. But still, its success depends on how healthy the sperm is, and the device, recently designed by Utkan Demirci and Erkan Tüzel, tries to ensure that the sorted/chosen sperm is the healthiest among millions of others, by using physics of fluid dynamics and customized algorithms to determine how the sperms move through narrow channels.

Demirci, who was also present at the aforementioned medical conference, told reporters on Tuesday that people have stood aloof from the microchip device since it was designed one year ago, but as more success stories came out of it, people's interest heightened.

The producing company of the device has been negotiating with distributors in countries such as Russia, Germany, and Greece as well as some Middle East and Asia Pacific countries who will be offering this device to their own citizens.

The company's co-founder Kılınç gave an example of how successful the microchip device was, by referring to a case of a couple who could not conceive via the method of IVF for the last 13 years. He said, the couple had come to their center and it was through their device that they finally got pregnant.
Last Update: Nov 03, 2015 7:02 pm
RELATED TOPICS