Life expectancy increased by 10 years in rich nations, except for US, OECD report says 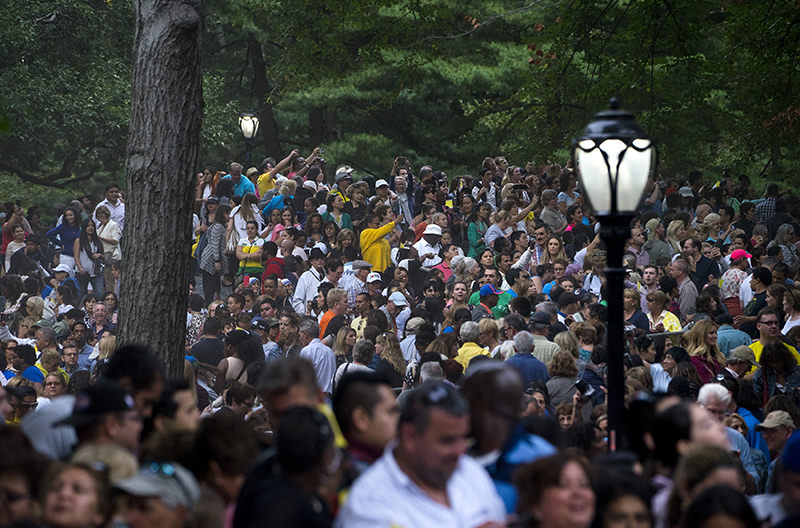 People in a large crowd reach out to get photographs as Pope Francis passing while traveling in a motorcade in New York's Central Park, Friday, Sept. 25, 2015. (AP Photo)
by French Press Agency - AFP
Nov 04, 2015 12:00 am
Rich countries have gained more than 10 years in life expectancy on average since 1970, a study released by the OECD said Wednesday, but the United States ranked near the bottom in the latest ranking for 2013.

Averaged across men and women, the US -- at 78.8 years -- was 27th in life expectancy at birth among the 34 countries in the Organization for Economic Co-operation and Development, the intergovernmental organization said.

Forty years ago, Americans lived a year longer than the OECD average, but today they have fallen well below the median, it said.

At the same time, the US outstripped other nations in per capita health expenditure, spending two-and-a-half times more than the average within the OECD, which also includes a handful of emerging economies such as Mexico and Turkey.

Life expectancy at birth measures how long someone born today would live if current mortality rates continued to apply. In reality, improvements in medicine means that age spans are likely to increase over time.

A persistent gap in life expectancy between women, who live longer, and men has gradually narrowed from about seven years to five, the study found.

Japan -- at 83.4 years -- along with Switzerland and Spain topped the charts for life expectancy in 2013, followed by Italy, France and Australia, according to the annual overview of health metrics.

At the bottom of the OECD 34-strong ranking were Slovakia, Hungary and, in last place, Mexico, where life expectancy was nine years less than in Japan or Spain.

Several factors account for the poor and declining life expectancy in the US, the report said, starting with its weak public health sector and the millions of Americans who remain uninsured.

Looking at major risk factors -- smoking, alcohol and obesity -- the US ranked last on the obesity index, but was among healthiest nations for tobacco consumption.

Austria, Estonia, France and Hungary scored very poorly across two risk categories: smoking and drinking. Hungarians were the only people to seriously overindulge in all three.

Sweden and Norway were the only countries among the 34 in which all three risk factors remained very low.