WHO declares end to Ebola outbreak after 11,300 deaths 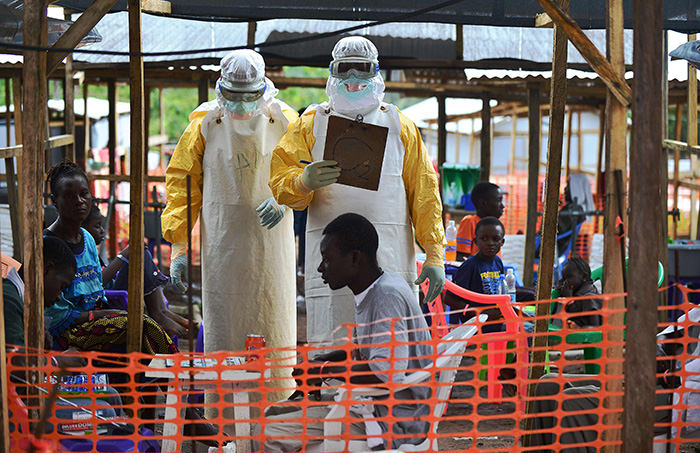 MSF medical worker, wearing protective clothing relays patient details and updates behind a barrier to a colleague at an MSF facility in Kailahun (AFP Photo)
by Associated Press
Jan 14, 2016 12:00 am
The World Health Organization declared an end to the deadliest Ebola outbreak ever on Thursday after no new cases emerged in Liberia, though health officials warn that it will be several more months before the world is considered free of the disease that claimed more than 11,300 lives over two years.

Thursday's success comes after a harrowing toll: Nearly 23,000 children lost at least one parent or caregiver to the disease. Some 17,000 survivors are trying to resume their lives though many battle mysterious, lingering side effects. Studies continue to uncover new information about how long Ebola can last in bodily fluids.

Liberia, which along with Sierra Leone and Guinea was an epicenter of the latest outbreak, was first declared free of the disease last May, but new cases emerged two times forcing officials there to restart the clock.

"While this is an important milestone and a very important step forward, we have to say that the job is still not done," said Rick Brennan, WHO director of emergency risk assessment and humanitarian response, at a news conference in Geneva. "That's because there is still ongoing risk of re-emergence of the disease because of persistence of the virus in a proportion of survivors."

In Liberia, there was guarded optimism Thursday about reaching the 42-day benchmark with no new cases. The ministry of health is still carrying out Ebola tests on dead bodies before burial, and remains on the lookout for any suspicious cases.

Follay Gallah, an ambulance driver who contracted the disease while intervening in an affected community in 2014, welcomed Thursday's news but warned: "We could have a recurrence if we don't do those things that we need to do."

Ebola is spread through direct contact with the bodily fluids of people who are sick or bodies of the dead. A country is considered free of the disease when it has passed two incubation periods of 21 days without any more cases. However, the most recent flare-up in Liberia confounded scientists as it was not initially clear where the new cases had come from.

WHO now says those cases "are likely the result of the virus persisting in survivors even after recovery." Of particular concern is the fact it is now known that Ebola is present in the semen of some male survivors up to a year later. The WHO said Thursday that Ebola can "in rare instances be transmitted to intimate partners."

Before the Ebola epidemic which is believed to have started in rural Guinea in December 2013 most of what was known about the disease was limited to studies of much smaller outbreaks in Congo and Uganda. This time, though, the disease made its way to Guinea's capital, then leaped across borders to Liberia and Sierra Leone. Cases also popped up in Mali, Senegal and Nigeria though transmission chains there were quickly shut down.

A Liberian man who traveled to the United States in October 2014 fell ill and died in Texas of Ebola. No other deaths emerged there, though two nurses got sick and the cases sparked panic in the United States.

There is no licensed treatment or vaccine for Ebola, which spread rapidly through the impoverished, crowded neighborhoods of Liberia and Sierra Leone's capitals in particular. Experimental treatments emerged during the outbreak but were limited in supply; those who received supportive care had much higher survival rates but beds at treatment centers initially were hard to come by.

The WHO and others have been roundly criticized for responding too slowly at the beginning of the outbreak, a fumbling that experts say ultimately cost lives across West Africa.

An Associated Press investigation found the U.N. health agency delayed declaring an international emergency for political and economic reasons. Emails, documents and interviews obtained by the AP show WHO and other responders failed to organize a strong response even after the signal was issued. None of the senior leaders involved in directing the Ebola response has been disciplined or fired.

"I think there's been general acknowledgement that WHO and the international community were slow at the start of this outbreak and there is no question that the disease did get away from us all collectively, and in retrospect there are a number of things that we would have done better and sooner," Brennan said Thursday.

WHO has said that major soul-searching and reforms have taken place as a result.

"I think you will see a much more responsive and effective WHO in future emergencies," he added.

In a promising sign, one experimental vaccine tested on thousands in Guinea seems to work. Dr. Margaret Chan, Director-General of WHO, has said if proven effective, the vaccine will be a "game-changer."
Last Update: Jan 14, 2016 4:45 pm