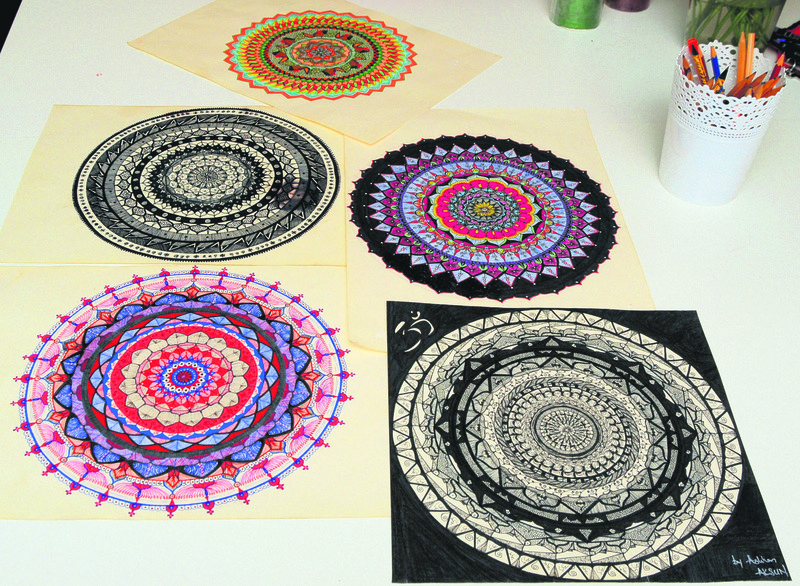 Circular forms in Indian art are generally called mandalas, the Sanskrit word for "sacred circle." These days, mandalas have increasingly been designed by patients with Alzheimer's disease and Down syndrome as well as other people to relieve stress

It has not been long since mandala, an art form referring to the symbols drawn or painted in a circular frame, gained noteriety in bookstores across Istanbul. Mandala coloring books and similar editions of the collection have taken their place on the bookshelves of best-sellers. Many people, however, tend to confuse mandala art with coloring books for adults; most using it as a stress-relieving activity.

The word "mandala" comes from the classic Indian language of Sanskrit, meaning "circle." In mandala, circles are associated with the concepts of wholeness, unity, harmony and the cycle of life. Mandala experts believe that these circles help practitioners focus inwardly; namely, on the spiritual world. Mandala circles regard the Earth, the Sun and the moon as conceptual circles in life such as family and community. Mandalas can feature geometric and organic forms and are recognizable images that reflect the specific meaning for the person who is designing it.

Throughout history, Tibetan Buddhist monks and Native Americans have practiced this art as a form of mediation and to improve their spiritual energy. Mandala can be found in Buddhist, Jewish, Christian and Islamic art as well as in Native American and Indigenous Australian practices. Mandala motifs appear not only in Buddhist stupas, but also in Muslim mosques. They decorate many architectural structures like those in the Divriği Ulu Mosque and the Çifte Minerali Madrasas in Erzurum. In addition, some Christian cathedrals feature mandala motifs as well.

Mandala is widely preferred as a form of art therapy, recommended for patients with dementia and Down's syndrome. Drawing or painting mandala circles is a sort of meditative act which helps patients relax. One week ago, a group of children with Down's syndrome received mandala therapy in part of a joint project "Geleceği Renklendiriyoruz" (We Are Coloring the Future) conducted by the EXPO 2016 Antalya Agency, Di-Sign Events and the Association of Down's Syndrome. Through mandala art therapy, children learn how to stay calm and improve their concentration through drawing mandala circles. Concentration is a problem among Down's syndrome patients, making this form of therapy invaluable for them. The Mandala can represent such children's thoughts and feelings and provide them with a mirror to express themselves. Psychoanalyst Carl Jung called mandala, "a representation of the unconscious self."

Generally, mandala workshops take place in a silent environment with a limited number of participants. Istanbul-based mandala specialist Gülben Gönülden offers workshops accompanied by breathing exercises and meditation. At her mandala center, members can take daily workshops as well as group and individual sessions. Having practiced mandala since 2008, Aslıhan Aksun is another professional working in the field who took mandala courses as a form of mediation from a Dutch mandala expert named Paco in Berlin. She became a trainer in 2014, becoming one of the first Turkish mandala experts.

Speaking to Daily Sabah, Aksun said she has been working to share this practice with others, helping individuals to explore their inner world. "I still organize personal development workshops and continue to share mandala through social and print media," she said.

When it comes to the popularity of mandala in Turkey, Aksun said there is a growing interest. "For the last year-and-a-half, I offer mandala training sessions at universities, preschools and corporations with a special focus on stress management. I also conduct workshops for mothers, children and adults, and participated in nationwide workshops and social responsibility projects," she added. Aksun opened a workshop with Paco after he settled in Turkey. "Through our workshop, we wanted to make mandala more popular," she said. As a result, they have completed numerous projects since last year.

Mandala can be practiced by individuals of all ages. If it is properly facilitated, children over four years of age and early stage Alzheimer's patients can draw mandala circles successfully.

Stressing that mandala is different from coloring books for adults, Aksun emphasized mandala's many benefits. "Drawing mandala is an influential tool to develop self-confidence, concentration, inward discovery and better experience of the moment you live in. It is a kind of journey that helps you become more patient. Mandala is a type of healing practice because people are able to forget anxiety - and even physical pain -- while concentrating on drawing circles," she said. Aksun added that, as a meditation tool, mandala symbolizes the mystical center of anything that has a circular or square shape. A circle with patterns is associated with the universe in the broad sense and makes practitioners think that nothing negative can penetrate this circle.

How to make mandala

There are different ways to create mandala designs; namely, by starting in the center of a page and drawing a shape that can adapt to an overall circular design or by the alternative method of drawing a circle first and adding a pattern inside of it. You can design patterns in different forms and then paint these as well.
Last Update: Jan 22, 2016 8:39 am
RELATED TOPICS