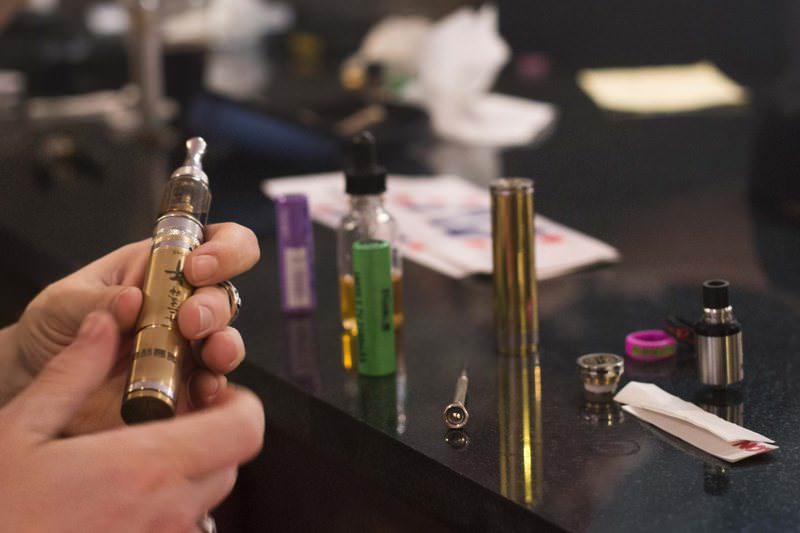 by Daily Sabah with AFP Jan 26, 2016 12:00 am
E-cigarettes, marketed as an aide for stopping smoking, may instead nudge teens towards tobacco, claimed the latest study Tuesday in a flood of research on the controversial gadget.

According to the research, teenagers who used an e-cigarette were more likely to start smoking a year later than those who never did.

Its findings were immediately challenged as inconclusive.

Researchers in the United States interviewed more than 2,300 Hawaiian school children, their average age just under 15, in 2013, and asked them if they had ever smoked or "vaped" -- inhaling and blowing out the vapor generated by an e-cigarette.

A year later, about half the group was questioned again.

Compared to those who never "vaped," those who tried it at least once in 2013 were almost three times more likely to have tried smoking a year later.

"Adolescents who use e-cigarettes are more likely to start smoking cigarettes," concluded the authors of the study published in the journal Tobacco Control.

"This result together with other findings suggests that policies restructuring adolescents' access to e-cigarettes may have a rationale from a public health standpoint."

But experts not involved in the study said the evidence was flimsy, and did not prove that e-cigarettes cause smoking.

"Does one lead to the other? Or does using e-cigs define a certain population of teens, i.e. the ones most likely to start smoking anyway?" said a commentary compiled by the Science Media Centre.

According to the study, just under 31 percent of the teens sampled had used an e-cigarette at least once in 2013, while about 15 percent had smoked at least one cigarette.

The US Centers for Disease Control and Prevention estimates that from 2011 to 2014, e-cigarette use among high school students grew from 1.5 percent to 13.4 percent.

Health experts and watchdogs are embroiled in debate as to whether e-cigarettes, often not strictly regulated, are safe, or even useful as a smoking cessation aid.

Earlier this month, another US-based study said e-cigarettes lowered the odds of successfully quitting -- but that research too was criticised as flawed.
Last Update: Jan 26, 2016 2:24 am
RELATED TOPICS