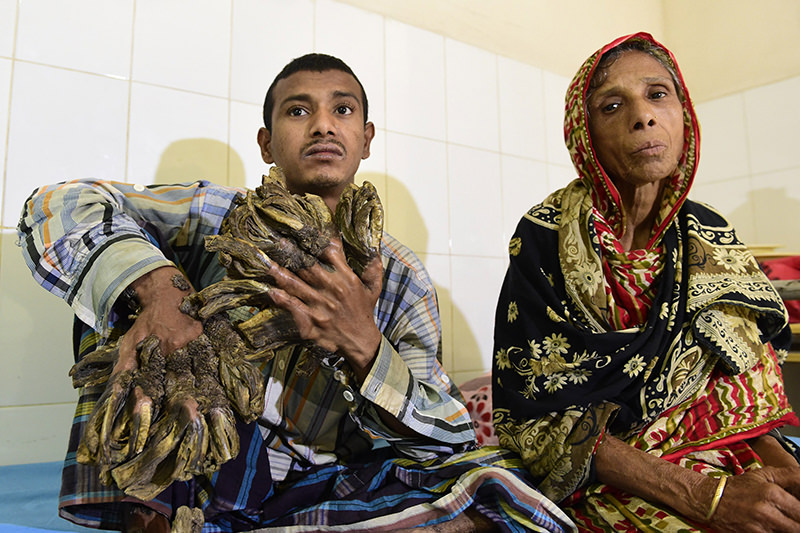 Abul Bajandar, from the southern district of Khulna, was undergoing preparations for the surgery to cut out the growths weighing at least five kilogrammes (11 pounds) that have smothered his hands and feet.

"Initially, I thought that they're harmless," the 26-year-old told AFP at the Dhaka Medical College Hospital (DMCH).

"But slowly I lost all my ability to work. There are now dozens of two to three inch roots in both my hands. And there are some small ones in my legs," said Bajandar who was forced to quit working as a bicycle puller.

A team of doctors has been formed to perform the operation at DMCH, Bangladesh's largest state-run hospital, which has decided to waive costs of the treatment.

Tests are underway to ensure Bajandar's root-like warts can be removed surgically without damaging major nerves or causing any other health problems.

"As far as we know there are three such cases in the world including Abul Bajandar. It is the first time we have found such a rare case in Bangladesh," he said.

An Indonesian villager with massive warts all over his body underwent a string of operations in 2008 to remove them.

Bajandar's elder sister, Adhuri Bibi, said hundreds of people have visited their home in Khulna over the years to see the "Tree Man".

"Even here at the hospital, hundreds have already gathered," she told AFP.

Bajandar, a father of one, said he tried cutting the warts when they first appeared, but it was extremely painful.

"After that I went to a village homeopath and herbal specialist. But those medicines only worsened my condition."

He also consulted doctors in neighbouring India, but he and his family could not afford the cost of the operation there.
Last Update: Feb 01, 2016 5:44 pm