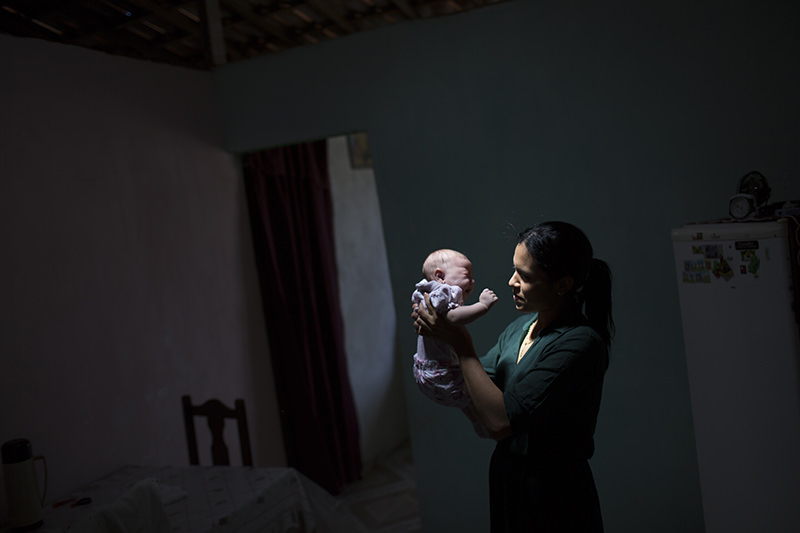 Juliana da Silva, is illuminated by a ray of sunlight as she poses for a photo holding her daughter Maria, who was born with microcephaly due to the Zika virus. (AP Photo)
by Daily Sabah with Reuters Feb 08, 2016 12:00 am
At least 12 groups are now working to develop a Zika vaccine and health authorities said on Monday they were working to ensure development proceeded as rapidly as possible.

The World Health Organization said it was important to establish speedy regulatory pathways, although all the vaccines remained in early-stage development and licensed products would take "a few years" to reach the market.

With no approved Zika vaccines or medicines and none even undergoing clinical studies, scientists and drugmakers are on the starting-block in fighting the mosquito-borne disease suspected of causing a spike in birth defects in Brazil.

However, Zika is similar to dengue, yellow fever and West Nile virus, for which vaccines exist or are being developed, and the hope is to try similar approaches against the latest hazard.

The London-based European Medicines Agency (EMA) said it had established an expert task force on Zika to advise companies working on vaccines and medicines, mirroring similar action during Ebola and pandemic flu outbreak in 2009.

"The agency is encouraging medicines developers to contact EMA if they have any promising projects in this area. EMA will also proactively reach out to companies already planning to work on investigational vaccines and offer scientific and regulatory advice," it said in a statement.

"Early and regular interaction with the agency can significantly speed up the development of medicines."

Barack Obama will also ask the U.S. Congress for more than $1.8 billion in emergency funds to fight Zika at home and abroad and pursue a vaccine, the White House said on Monday, but the president also said there is no reason to panic over the mosquito-borne virus.

Zika, spreading rapidly in South and Central America and the Caribbean, has been linked to severe birth defects in Brazil and public health officials' concern is focused on pregnant women and woman who may become pregnant.

Obama's request to Congress includes $200 million for research, development and commercialization of new vaccines and diagnostic tests for the virus.

Most of the money sought by Obama, who faces pressure from Republicans and some fellow Democrats to act decisively on Zika, would be spent in the United States on testing, surveillance and response in affected areas.

Obama's funding request to Congress also includes $335 million for the U.S. Agency for International Development to support mosquito-control, maternal health and other Zika-related public health efforts in affected countries in the Americas.

There have been 50 confirmed cases of Zika in the continental United States among people who had traveled to affected areas, according to federal health officials.

The White House said it would ask for $250 million for Puerto Rico, the fiscally struggling Caribbean U.S. territory. Zika is actively being transmitted in Puerto Rico and other warmer territories.

Several biotech and pharmaceutical companies are racing to develop a Zika vaccine, including France's Sanofi, which already has vaccine for dengue.

But scientists know relatively little about Zika and the road to developing a preventative shot against the disease is strewn with hurdles - not least because the group viewed as most at risk are pregnant women.

Some research is also being done on prophylactic medicines against Zika, which would work in the same way as drugs to stop people catching malaria.

The development of better diagnostic tests is another high priority. Currently, it is hard to differentiate Zika from other similar so-called flaviviruses, such as dengue.

The WHO said diagnostics were "a top urgency". It issued a call to interested companies on Feb. 5 to submit potential products for emergency quality assessment, so that successful tests could be put to use quickly.
Last Update: Feb 08, 2016 7:41 pm
RELATED TOPICS