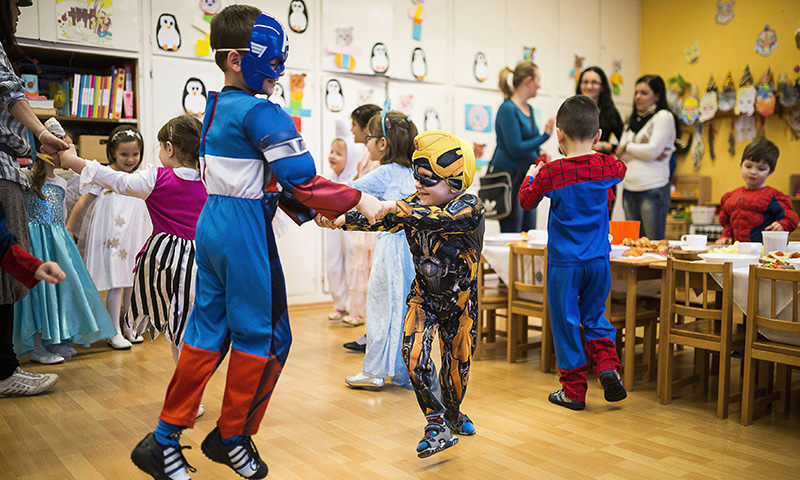 Children dressed in fancy costumes dance during the carnival celebrations in the Children's House Kindergarten in Nyiregyhaza, Hungary (EPA Photo)
by Associated Press Feb 13, 2016 12:00 am
From the cacophony of day care to the buzz of TV and electronic toys, noise is more distracting to a child's brain than an adult's, and new research shows it can hinder how youngsters learn.

In fact, one of the worst offenders when a child's trying to listen is other voices babbling in the background, researchers said Saturday at a meeting of the American Association for the Advancement of Science.

"What a child hears in a noisy environment is not what an adult hears," said Dr. Lori Leibold of Boys Town National Research Hospital in Omaha, Nebraska.

That's a quandary in our increasingly noisy lives because "young children learn language from hearing it," said Dr. Rochelle Newman of the University of Maryland. "They have a greater need for understanding speech around them but at the same time they're less equipped to deal with it."

It's not their ability to hear. For healthy children, the auditory system is pretty well developed by a few months of age.

Consider how hard it is to carry on a conversation in a noisy restaurant. Researchers simulated that background in a series of experiments by playing recordings of people reading and talking while testing how easily children detected words they knew, such as "playground," when a new voice broke through the hubbub, or how easily they learned new words.

The youngest children could recognize one person's speech amid multiple talkers, but only at relatively soft noise levels, Newman said. Even the background noise during relatively quiet day care story time can be enough for tots to miss parts of what's read, she said.

It's not just a concern for toddlers and preschoolers. The ability to understand and process speech against competing background noise doesn't mature until adolescence, Leibold said.

Nor is the challenge just to tune out the background buzz. Brief sudden noises someone coughs, a car horn blares can drown out part of a word or sentence. An adult's experienced brain automatically substitutes a logical choice, often well enough that the person doesn't notice, Newman said.

"Young children don't do this. Their brain doesn't fill in the gaps," she said.

Children who were born prematurely may have an additional risk. When preemies spend a long time in an incubator, their brains get used to the constant "white noise" of the machine's fan different from a full-term baby who develops hearing mom's voice in the womb and thus is wired to pay more attention to voices, said Dr. Amir Lahav of Harvard Medical School.

He had mothers of preemies record themselves singing lullabies or reading stories, and filtered them along with the sound of mom's heartbeat into the incubator three times a day when she wasn't otherwise visiting. The brain's auditory cortex became more developed in babies given that extra womb-like exposure compared with preemies with typical incubator care, Lahav found. Moreover, when those babies were big enough to leave the hospital, they paid more attention to speech, he said.

"Exposure to noises and sounds very early in life will spill over to affect how our brain is going to function," Lahav said.

Noise also is a special challenge for children with hearing loss, who may need technology beyond standard hearing aids to cope, Leibold said, describing special receivers that can transmit a teacher's voice directly to the ear so it's not lost in classmates' chatter.

The research has implications for classroom design, too, Leibold added, as the type of flooring or ceiling height can either soften kids' natural noise or bounce it around.

But learning starts at home, and University of Maryland child language specialist Nan Bernstein Ratner often has parents ask if they should stimulate a tot's environment with interactive toys and educational TV.

"We tend to think bustling environments and creating background noise is stimulating for kids," she said. But, she said, "what's stimulating on the part of the parent may not be for the child."

Don't leave the TV, radio and other electronics on in the background. It's not clear whether soft music is distracting, but lyrics might be, Ratner said.

Especially in noise, make sure tots see your face. They can pick up on mouth movements, Newman said.

If the child doesn't understand, try again with simpler words.

If a child's having school behavior problems, make sure being unable to hear in class isn't the problem.
Last Update: Feb 13, 2016 11:40 pm
RELATED TOPICS