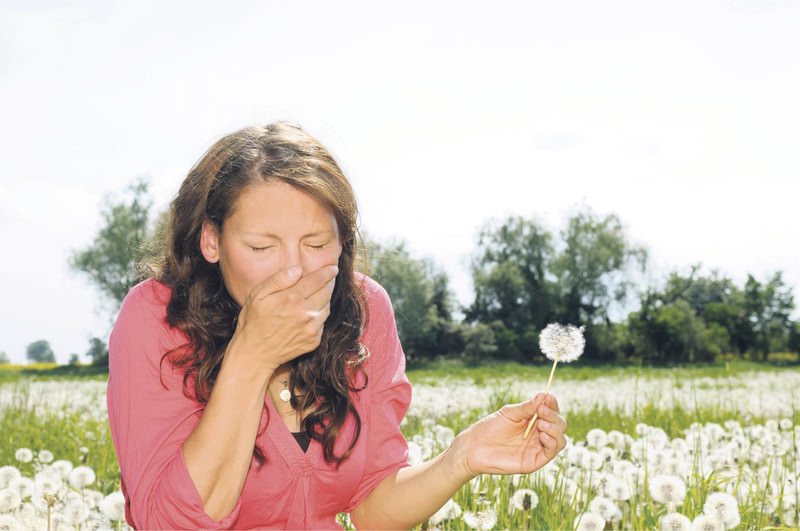 With the advent of spring, the number of sneezing people has visibly increased due to pollen and dust. One of the most significant reasons for allergies seems to be the rise in pollen, but there are ways to minimize the effects of allergies

With the coming of spring, the weather is getting warmer and nature regenerates; trees come into flower, grass turns green and flowers blossom. While some people do not even realize the changing of the seasons, some suffer from spring allergies, which reveal themselves as sneezing and runny nose and eyes. Seasonal allergic rhinitis, also known as spring allergies, is one of the most frequent allergic illnesses.

Allergies are triggered after the immune system reacts to an unidentified substance, in other words an antigen. To defeat this unknown substance, the immune system sends antibodies to the entrance point of the antigen. The fight between antigen and antibody causes the release of some chemical substances in the body and these substances lead to allergic diseases. The most frequent symptoms of spring allergies are sneezing, runny nose and eyes, itchy feeling in the eyes, nasal congestion and sometimes headaches. Moreover, some patients might also suffer from hearing problems, sore throat and hoarseness. Otorhinolaryngology specialist Professor Mustafa Kazkayası said: "While allergic symptoms continue for an entire year for some, others suffer from these symptoms according to the season. People suffering from hay fever usually complain about these symptoms in spring and autumn and allergens such as grass, trees and pollens usually cause hay fever." Those who suffer from allergies throughout the year are usually exposed to house dust mites, fungus and animal fur. On the other hand, studies show that air pollution triggers allergic reactions. A study conducted in Istanbul revealed that the number of people who suffer from allergies is higher in districts that are known for polluted air.

Pollens, certain food, fungus, dust, animal fur, chemical substances, certain medications and environmental factors might induce allergic reactions. Among all the allergens, grass pollen is the more common allergen in Turkey. Kazkayası said that some allergens are always around in nature, and continued: "Allergens such as house dust mites, animal fur, food and chemical related allergies are seen throughout the year. The symptoms caused by these allergens usually occur during winter as people let less air into their houses. Fungus and pollens also lead to allergic symptoms and they can be found both inside and outside the house. Colorful and sweet-smelling flowers cause fewer allergies despite general belief."

Although spring allergies are not generally seen as serious health problems, allergies mostly result in social, clinical and economic loss. "Seasonal allergic rhinitis symptoms might be seen for more than four months," said Professor Kazkayası. "Spring allergies cause labor loss in adults and school day loss in children as well as result in economic loss due to diagnoses and treatment expenses. Spring allergies might also trigger other diseases such as asthma and sinusitis as well as developmental disorders in children's teeth and jaws, conjunctivitis and food allergies."

Kazkayası said that allergies are genetic disorders, but that if another member of the family has allergies, it is way easier to diagnose other patients. "Allergic rhinitis is usually seen in children and young adults and patients suffering from allergic symptoms should undergo ear, nose and throat examinations following their treatment," he added. If the diagnosis of the patient points to an allergy, an allergy test is conducted. "Along with allergic rhinitis, some patients also suffer from sinusitis and they are usually prescribed antibiotics; hence, physicians prefer to run allergy tests on patients whose sinusitis repeats. The control over allergic symptoms is undertaken by blending various treatments including medication treatment and vaccines," Kazkayası said. To avoid allergic reactions, patients should first stay away from allergens that they react to. Pharmacotherapy is also the most used treatment method for allergies. However, it should be remembered that the symptoms withdraw as long as the patient takes his or her medication and as soon as the patient stops taking medication, allergic symptoms reoccur. People who suffer from allergic rhinitis are advised to begin taking medication two weeks before the allergy season kicks off. However, allergy medicines should only be taken after patients consult a doctor since some allergy medicines have side effects.

HERE IS SOME ADVICE TO AVOID SYMPTOMS

- Keep your doors and windows closed during pollen seasons

- Remove all the plants in your house

- Do not look after an animal inside your house

- Instead of feather and wool pillows, beds and quilts, use synthetic ones

- Do not smoke or allow people to smoke near you