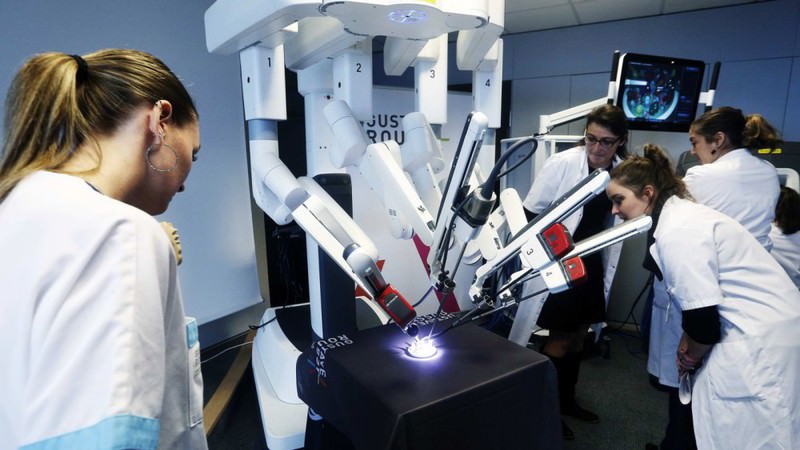 by Anadolu Agency May 06, 2016 12:00 am
Scientists in the United States have announced a major milestone in robotic surgery, with the news that a mostly autonomous robot was able to successfully stitch animal intestines - a pliable and challenging body part. A reported published in Science Translational Medicine on Wednesday said the robot was able to conduct the successful surgery in a laboratory setting and inside a living animal. Intestines are a notoriously difficult organ to perform surgery on because they are soft, slippery and easy to puncture. Experts deem robotic surgery less reliable than surgery accomplished completely by human doctors. With the latest breakthrough, researchers said they believe robots will soon be able to outperform human surgeons, especially in problematic environments such as a space station. The team behind the robot suggests that surgery in the future may be performed by robots overseen by a trained human.

The team built a machine they called the Smart Tissue Autonomous Robot, or STAR. The robot possesses suturing tools as well as three-dimensional imaging, positioning and force sensing technology. "With all of these components, the authors were able to use STAR for soft tissue surgery - a difficult task for a robot given tissue deformity and mobility," the authors wrote in the report. "Surgeons tested STAR against manual surgery ... and found that the supervised autonomous surgery offered by the STAR system was superior." The system is actually similar to facial tracking software used by Hollywood studios to create computer-generated images. By imaging and positioning an organ, the robot can detect and follow certain markers in the flesh. This allows for extremely accurate surgeries.

Using the STAR system on humans is still years away but researchers are extremely hopeful about the future. "By taking human intervention out of the equation, autonomous robots could potentially reduce complications and improve the safety and efficacy of soft tissue surgeries, about 45 million of which are performed in the U.S. each year," according to the American Association for the Advancement of Science, which published the study. The research was conducted at Children's National Hospital in Washington, D.C., and John Hopkins University in Baltimore.
RELATED TOPICS