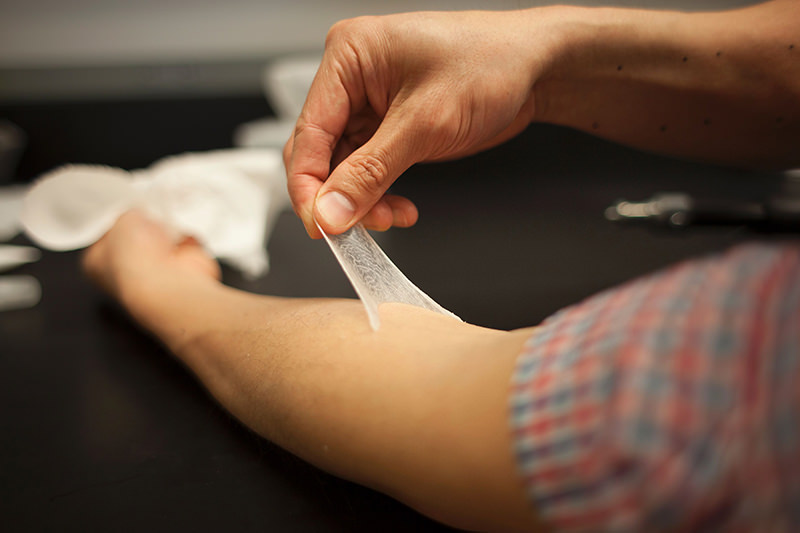 US scientists have developed a new, transparent polymer material that temporarily tightens sagging skin and eliminates eye bags. (AFP Photo)
by Anadolu Agency
May 09, 2016 12:00 am

Scientists said Monday they have created a polymer that mimics human skin, an invention that could work to deliver drugs or provide facelifts.

The polymer, a cream that is set to be released to the public in the near future, creates an elastic "second skin" after it is applied.

Made from silicon, the skin-like substance can be used to tighten sagging skin or remove bags from under the eyes.

While the scientists from Harvard University and the Massachusetts Institute of Technology are excited about its cosmetic applications, they are also very enthusiastic about its ability to treat conditions including eczema, dermatitis and psoriasis -- itchy ailments that can be debilitating for elderly sufferers. The cream could also be used to deliver drugs directly to a person's skin.

Olivo Labs, a company founded by scientists from both institutions, also announced it was patenting the material for commercial use.

"It's an invisible layer that can provide a barrier, provide cosmetic improvement, and potentially deliver a drug locally to the area that's being treated," according to MIT's Daniel Anderson, who co-authored the study. "Those three things together could really make it ideal for use in humans."

The skin was created using chemicals that connect silicon and oxygen in a cross-linked polymer layer, or XPL. The process behind XPL is similar to how rubber, a rather fragile material, is treated to become tires.

Unlike lotions, the XPL does not wash off in water and stays strong for 24 hours.

"Creating a material that behaves like skin is very difficult," said co-author Barbara Gilchrest, a dermatologist at Massachusetts General Hospital. "Many people have tried to do this, and the materials that have been available up until this have not had the properties of being flexible, comfortable, nonirritating, and able to conform to the movement of the skin and return to its original shape."

The research was published in the journal Nature Materials.