There are plenty of ways to find calm but breathing classes are becoming more popular in big, urban cities to avoid stress and its physical and psychological outcomes. A new breath coaching federation established in Istanbul is encouraging more to engage in breathing exercises and extend them at school

For many people, notably those who work all day, relaxation means going home after work and lying on the coach, going out for a drink with friends or just zoning out in front of the TV. However, relaxation is not merely about keeping oneself from work or stress factors, it is actually about activating the body, both physically and psychologically. Taking a deep breath is not enough for this, but one solution might be attending breathing classes, which have become more common in Turkey's big cities.

A number of breath coaches and breathing classes fall under the umbrella of the Breath Coaching Federation (NFK), led by expert breathing coach Nevşah Karamehmet. She was introduced to breath coaching by a Dutch friend and later founded the NFK to set standards for breath coaching education and popularize it around Turkey. Karamehmet said: "After I took only one course, I decided to introduce breath coaching to Turkey because I was very impressed by the class. I left the session thinking that I have finally found the secret of life." 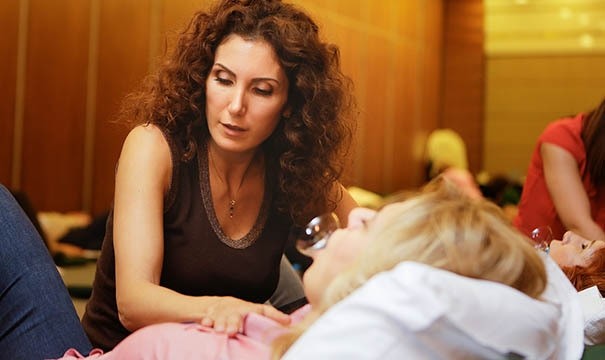 Karamehmet said that she had a hard time getting out of bed when she was young, but feels more energetic after breathing sessions, adding that effective breathing is a primary need physically as well as emotionally. According the American Institute of Stress, abdominal breathing for 20 minutes to 30 minutes each day reduces anxiety and stress. "Deep breathing increases the supply of oxygen to your brain and stimulates the parasympathetic nervous system, which promotes a state of calmness. Breathing techniques help you feel connected to your body - it brings your awareness away from the worries in your head and quiets your mind," experts say.

Karamehmet works with roughly 20,000 people both in private and group sessions. Sharing the story of how she decided to establish the NFK, Karamehmet said: "Breath coaching became very popular over the last few years. However, some people who have not yet received their proficiency pronounce themselves as breath coaches. Once I realized that there is nothing we can do to stop them, we thought that we should found a federation. I have trained dozens of breath coaches, and they all need to be evaluated separately from other people who are teaching breath techniques."

Karamehmet said that breathing exercises help people use their full potential and said that if one cannot use their breath efficiently, it negatively affects the functioning of the brain, muscles and metabolism. She stressed that many people are still not fully aware of the benefits of breathing techniques.

The breathing class exercises the diaphragm, intercostal muscles and, if practiced regularly, can positively affect lung capacity. It also increases blood and oxygen flow to the brain and body and has significant physical impact on the wellbeing. These classes can also be designed for different age groups and categories like breathing for relaxation and balance; breathing for teens; breathing for pregnant women; breathing for overcoming trauma; breathing to overcome pain, fear and anxiety; breathing for better sleep and breathing for creativity.

"Because people cannot breathe in the right way, their bodies do not burn fat and diet programs do not work. If a person waits for few seconds before breathing out, that person tend to have addictions and cannot quit these addictions. If people do not how to breathe naturally, their natural habit of breathing usually developed when they were two or three years old. Since it became a habit, people continue to do it unintentionally during the day and think negatively, become reckless and overreact. They become ill easily, and their immune systems break. While your whole body system should work like a clock, once your breathing system breaks, everything else follows."

Karamehmet said that one of her friends who took breath coaching beat thyroid cancer, her mother has no more migraines and her father also beat cancer. She also claimed that women who were previously unable to get pregnant, have had babies after taking breathing lessons. "Turkish actress Didem Uzel is among them," Karamehmet said. "She is currently 45 years old and pregnant. Uzel is also my breathing coach."

In near future, breathing classes will grow as the NFK is working with the National Education Ministry to offer breathing courses at schools, starting in September. "We have already started trainings at certain schools. Breath coaching should be taught at schools, at least as an elective course. We are currently working on this. Our plan is to offer classes in every school after five years, once we receiving approval from the ministry."
RELATED TOPICS