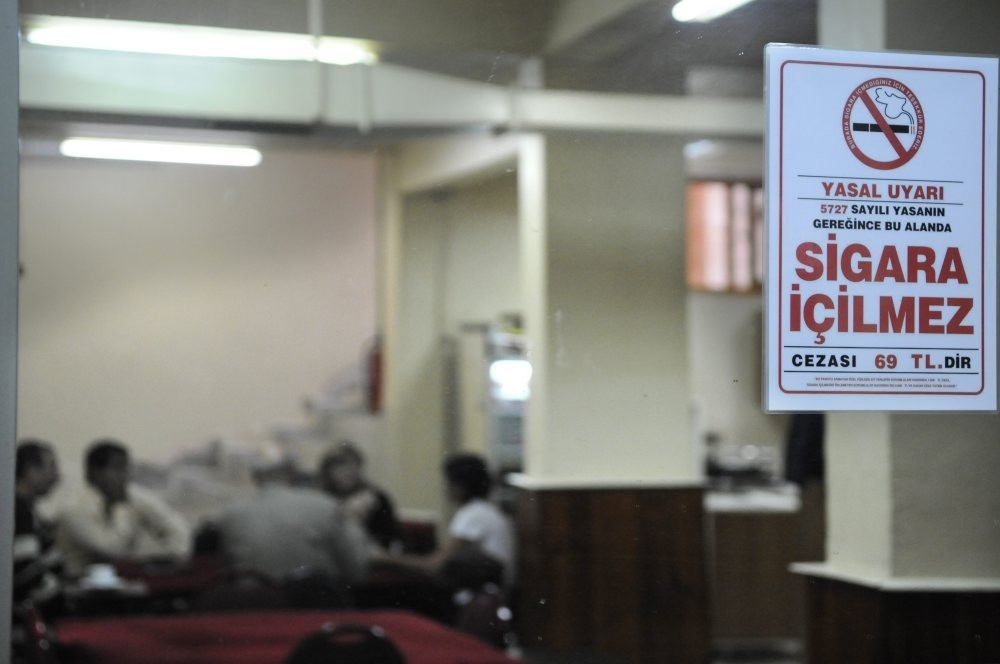 A no-smoking sign on the window of a coffeehouse. The first comprehensive smoking ban was introduced in 2009 and was hailed by health authorities.
by Daily Sabah Jul 19, 2016 12:00 am

Turkey's battle to stamp out smoking, a previously endemic habit, is meeting success with a drop in smoking rates after seven years of smoking ban which the government intends to expand

Smoking has been one of the habits most associated with Turks for decades and even created the expression: "To smoke like a Turk." Today, the country with a high prevalence of smokers marks the seventh year since the most comprehensive smoking ban came into force. Figures show the ban, along with escalated taxes and free treatment for smokers, helped decrease smoking in the country. A World Health Organization (WHO) report released in 2015 showed a 12 percent decline in tobacco sales and a decline in the prevalence of tobacco smoking from 31.2 percent to 27.1 percent in the four years prior to the report.

On July 19, 2009, the state's Official Gazette formally introduced a smoking ban for all indoor spaces, including restaurants, bars, cafes and similar establishments, and one year after the ban was extended to smoking in various sites from stadiums to courtyards of mosques and hospitals. Although the first smoking ban was introduced in 1997, it was confined to public buildings, airplanes, buses and other means of mass transit. It took more than a decade and a determined leader to launch a renewed battle against the habit depicted as the primary cause of several cancers by scientists. Then Prime Minister Recep Tayyip Erdoğan, a staunch teetotaler, is largely credited for the effective implementation of the ban that significantly limited space for smokers. Erdoğan did not abandon his anti-smoking policy after he was elected president, and even though he officially has no say in daily politics, he personally sees to people he comes across giving up the habit, seizing their cigarette packs before having them "pledge" to quit smoking until their next meeting. One of the most famous of these episodes was when he met Bulgarian Foreign Minister Daniel Mitov at the recent NATO summit in Poland earlier this month. Spotting the pack of cigarettes in a pocket of the young minister, Erdoğan grabbed it and signed it, part of his usual practice with smokers. On several occasions he has advised smokers, street vendors and even a renowned journalist to pledge to kick the habit and write this pledge down on a pack of cigarettes. This even led to a photo exhibition on national No Smoking Day, with images of Erdoğan grabbing a pack and handing out a pen to smokers, which became the subject of the photo exhibition the presidency hosted, along with cigarette packs he "confiscated."

Turkey is among the top-seven countries that have passed 100 percent smoke-free laws, according to the WHO. The latest figures from a Turkish regulatory authority on the tobacco and alcohol market had revealed that some TL 230 billion ($85 billion) were spent on tobacco products in the past decade.

Moreover, Turkey is one of the few countries combating smoking effectively with efforts to curb smoking by helping addicts. Smokers are provided with Bupropion HCI and Varenicline, two drugs used as smoking cessation aids and nicotine replacements.

The Health Ministry, which oversees anti-smoking initiatives, plans to step up its fight against smoking with new measures addressing the decreasing population of smokers in Turkey. Smoking will be banned in public parks and gardens and other public places, but specific areas will be designated for smoking.

The new measures are part of an anti-smoking campaign touting "airspace without smoke," which was lauded by anti-tobacco groups and the international community.

Expected to be implemented this year, the new bans will prohibit smoking in public areas such as in front of shopping malls, places where smoking was allowed previously. Spaces will be designated in those places for smokers as the government mulls it would take longer to convince all smokers to quit, and access to free drugs still remains limited.

The Health Ministry will also crack down on violations of the smoking ban in enclosed spaces of restaurants, cafes and eateries, especially in winter. More inspections are being mulled to curb violations, and new regulations will be enacted to define the authorities issuing the fines, a point of contention by smokers, especially in private businesses.

The ministry will also further restrain spaces allocated for smokers. Businesses will be required to separate tables for smokers and non-smokers, so as to prevent secondhand smoke. Currently, restaurants and similar venues offer private spaces for smoking customers in enclosures outside, but those spaces are ultimately connected to interior spaces, leading to complaints over second-hand smoke.
Last Update: Jul 19, 2016 10:33 am
RELATED TOPICS