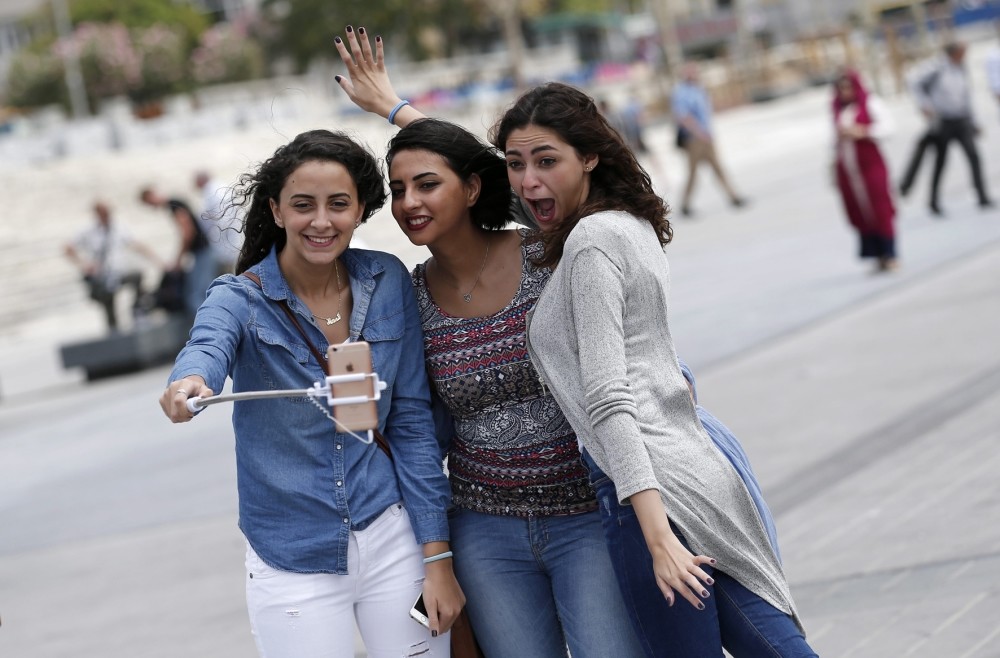 More and more, people are obsessed with how they look in their selfies. Selfie obsession feeds this urge to change oneu2019s outlook, as more people question if they can get help from plastic surgery.
by Zeynep Esra İstanbullu Jul 28, 2016 12:00 am
Habits in our daily lives change in parallel with the development of social media. The recent selfie trend is showing its effect in the field of plastic surgery, and in psychological and social dimensions. According to Aesthetics and Plastic Surgery Specialist Opt. Dr. Aysun Bölükbaşı Mamak, the number of people leaning towards aesthetics after they see themselves on social media is on the increase.

Mamak says there is a strong correlation between the selfie trend and aesthetics. Even though there has not been a study carried out regarding the connection between selfies and plastic surgery in Turkey, the American Academy of Facial Plastic and Reconstructive Surgery conducted a relevant study in 2014. One third of the plastic surgeons participating in the study say they have seen an increase in the demands of their patients who are more conscious of their appearance now that they are more frequently seen on social media. Compared to 2012 and 2013, there has been a 10 percent increase in rhinoplasty and a 7 percent increase in hair transplantation, while a 6 percent increase has been observed in eyelid surgery. The observation study in 2014 indicates that people under the age of 30 are the most affected. Cosmetic operations such as Botox and filling are not included in the study, but according to Mamak, the demand in these operations has increased as well.

"As plastic surgeons, the situation is not different from this in accordance with our clinical experiments. More and more, people are obsessed with how they look in their selfies. In contradistinction to our appearances in the mirror, we realize more things that we want to change when we see ourselves in the pictures. Selfie obsession feeds this urge and more and more people question if they can get help from plastic surgery," Mamak said. "From the coming demands, we can see that people are mostly uncomfortable with their nose, lips and neck in their selfies. In close-up images, the nose looks larger. Similarly, since the lips look smaller than usual, they think they need larger lips. Since most selfies are taken from below, the neck seems jowly or saggy from this angle."

Stating that she did not believe that the selfie craze would push people towards excessive cosmetics operations, Mamak said people's self-esteem issues and subconscious have become more visible. "Questioning ourselves mostly with photos brings along the will to change," Mamak said, also adding that it is normal for plastic surgery to turn into a demand since it is easy and accessible. "We are in a new century and the prominent factors of this century are technology and visual communication. The fact that even two-year-olds are in harmony with tablets indicates that the new generation will be more interested in this issue," Mamak said.
RELATED TOPICS