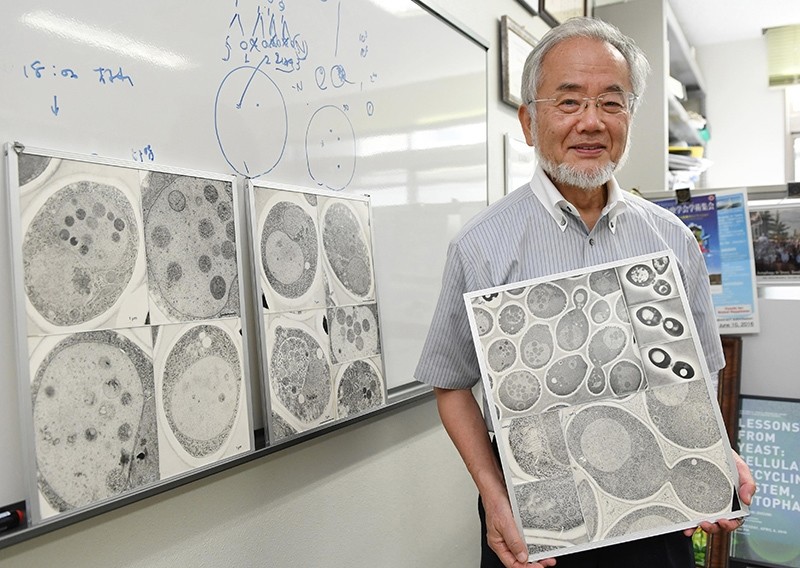 In this July, 2016 photo, Japanese scientist Yoshinori Ohsumi smiles at the Tokyo Institute of Technology campus in Yokohama, south of Tokyo. (AP Photo)
by Oct 03, 2016 12:00 am

Autophagy, the little-understood method by which human cells dispose of harmful waste and unwelcome intruders, may one day be central to therapies for longer, healthier living, experts said.

Japanese cell biologist Yoshinori Ohsumi was awarded the 2016 Nobel Medicine Prize Monday for discovering genes involved in autophagy, a non-stop housecleaning process that keeps cells healthy, and is thought to spur ageing and disease when disrupted.

Scientists are striving to "find a way to increase it beyond what it normally does," said University of Edinburgh cell biologist Simon Wilkinson referring to future treatment possibilities for cancer and neurodegenerative diseases such as Alzheimer's or Parkinson's.

"Can we find drugs that will ramp it up further than it would ordinarily be?" he told AFP by phone. "Can we ameliorate these horrible disorders?"

Trial drugs in lab experiments with human cells and mice have shown that autophagy can indeed be boosted.

In "mouse models, for example, where autophagy has been increased genetically, the mice do age better," Wilkinson said.

Concretely, this meant a less rapid accumulation of damaged proteins in cells, and a metabolism with a slower rate of age-related decline.

Autophagy -- from the Greek words for "self" and "to eat" -- is a process by which cells in animals and plants get rid of damaged proteins, as well as specialised structures called organelles which have become defunct.

Allowed to accumulate, these useless scraps would damage the cell and upset its normal functioning, leading to health problems.

Autophagy was already known to scientists in the 1960s, but Ohsumi, who studied the process in yeast in the 1990s, was the first to uncover the genes responsible.

Yeast is a favourite of biologists because it shares much of its cell structure and functioning with humans and other animals.

Autophagy happens when fatty membranes called autophagosomes envelop the unwanted waste and sequester it from the rest of the cell.

The autophagosomes then join up with another specialised cell compartment full of digestive enzymes, called a vacuole, to obliterate the waste.

"Autophagy declines when we age. That's why we accumulate these dysfunctional proteins that cause diseases," University of Warwick autophagy expert Ioannis Nezis told AFP.

"Now we are trying to understand how this process declines during ageing, and how we can find innovations to activate this process and keep our cells healthy for longer, so we can live a better and longer life."

The experts stressed that an autophagy-based drug was still far off.

"Tests are being conducted on mice," said Guido Kroemer, an autophagy researcher at the Inserm medical research institute. "Tests on humans might begin in a few years."

Two main avenues were being investigated, he explained.

The first was an autophagy stimulator to slow ageing and the development of diseases such as diabetes, clogged arteries, certain cancers or neurodegenerative conditions.

Another option was to use autophagy inhibitors to lower cancer cells' resistance to chemotherapy.

Much more is understood about autophagy since Ohsumi's breakthrough -- with about a dozen papers published on the subject until 1990, and some 30,000 since then, according to Nezis.

But a lot remains unknown -- chiefly how and when to use a drug molecule to boost autophagy without causing unwanted side-effects.

Wilkinson cautioned autophagy was unlikely to yield the elixir of life.

"This is an increase in health during ageing, it's not immortality by any stretch," he said.

"Inevitably, there will come a point where the autophagy process is finite... where the fundamental capacity of cells is just overcome by ageing-related damage."