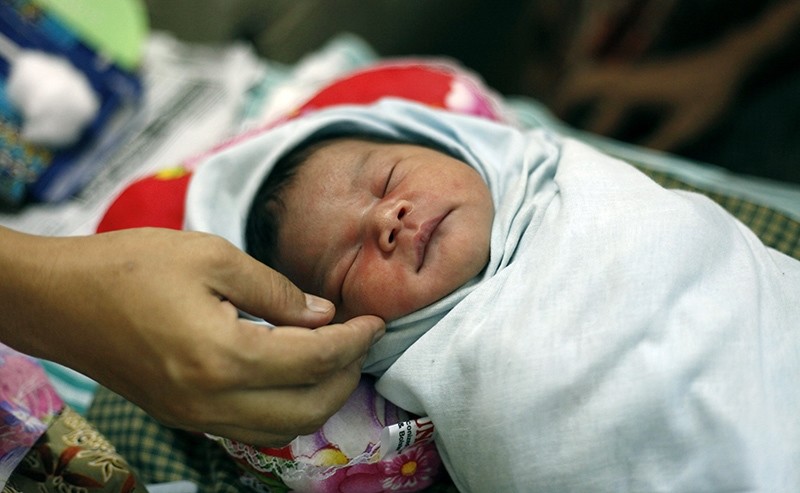 To reduce the risk of sudden death, babies should sleep in the same room as their parents but in their own crib or bassinet for the first year of life, US doctors said Monday.

The new policy statement by the American Academy of Pediatrics still says babies should sleep on their backs, on a clean surface free of toys and blankets, a guideline that has been in place since the 1990s and has reduced sudden infant deaths by about 50 percent.

Still, some 3,500 infants die each year in the United States from sleep-related deaths, including sudden infant death syndrome (SIDS) and accidental suffocation and strangulation.

The main change to the AAP guidelines, which were last issued in 2011, is the specific call for infants to stay in their parents' room for six months to a year if possible -- but not sleep in the same bed.

"Parents should never place the baby on a sofa, couch, or cushioned chair, either alone or sleeping with another person," said lead author Rachel Moon.

"We know that these surfaces are extremely hazardous."

Experts say that urging parents to put babies to sleep on their backs instead of their bellies helped drive down the rate of sudden infant death from 120 deaths per 100,000 live births in 1992 to 56 deaths per 100,000 in 2001 -- a 53 percent reduction in one decade. That advice still stands.

Deaths from SIDS have plateaued in recent years, but it is still the leading killer of babies aged one month to one year.

Children may become entangled in bedding, or suffocate under bumpers or toys, get squeezed in the corner of a couch or armchair, get overheated, or simply stop breathing for no apparent reason.

"It is nothing but tragic," said Peter Richel, chief of the department of pediatrics at Northern Westchester Hospital, who remembers losing two patients in the past 26 years to sudden infant death -- a four-month-old boy and a two-week-old girl.

"Often there is nothing special to point to, other than they are just kind of taken away," he said.

"It is something that one never forgets."

Other risk factors for SIDS include smoking in the home, and exposing babies to drugs or alcohol.

Richel said that the new policy means doctors will have to change some of their long-held advice.

"Many pediatricians will suggest that by two months of age, infants go to their own room, and with the use of a monitor so that you can hear them cry out for a feeding," said Richel.

"This really goes against that kind of usual advice, which is fine, because if it saves lives we are all for it."

The new policy is described in a paper called, "SIDS and Other Sleep-Related Infant Deaths: Updated 2016 Recommendations for a Safe Infant Sleeping Environment," and will be presented Monday at the AAP National Conference and Exhibition in San Francisco.

"The most important thing to remember is that the crib should be free of all loose objects that could lead to strangulation or suffocation," said Robert Glatter, an emergency physician at Lenox Hill Hospital, who was not involved in the research.

"This means that a bare environment is ultimately safest."

The AAP policy also suggests placing newborn infants skin-to-skin with the mother "immediately following birth for at least an hour as soon as the mother is medically stable and awake."

Breastfeeding is recommended, but mothers are urged to move the baby to a separate sleeping space afterward.

"If you are feeding your baby and think that there's even the slightest possibility that you may fall asleep, feed your baby on your bed, rather than a sofa or cushioned chair," said co-author Lori Feldman-Winter, a member of the Task Force on SIDS.

"If you do fall asleep, as soon as you wake up be sure to move the baby to his or her own bed," she said.

The highest risk period for SIDS comes between the ages one to four months. SIDS is rare in babies older than eight months.

Other strategies include offering a pacifier at nap time and bedtime, and making sure infants get all their recommended vaccines.

Parents are warned against using expensive home monitoring systems, as well as wedges or positioners that may be marketed as reducing the risk of SIDS.

"We know that we can keep a baby safer without spending a lot of money on home monitoring gadgets but through simple precautionary measures," Moon said.