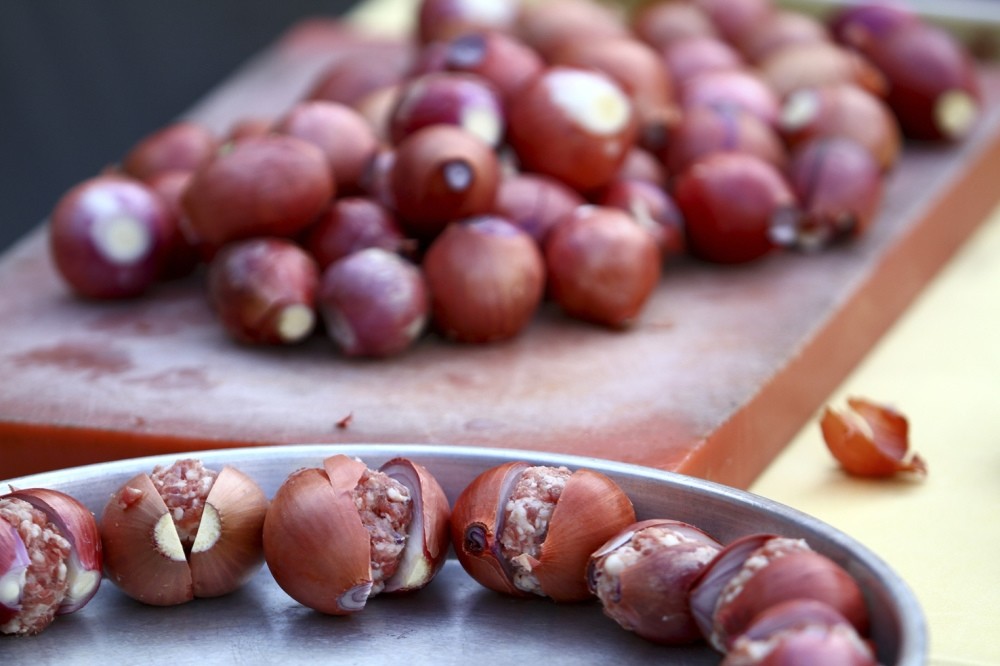 by Anadolu Agency Nov 22, 2016 12:00 am
The city of Gaziantep in southeastern Anatolia, recognized on the UNESCO World Heritage List, has a cuisine as rich as its history. One of the oldest cities in the world, Gaziantep is home to some of the best Turkish cuisine, influenced by Adana to the west and Syria's Aleppo to the south.

The onion kebab, which holds an important place in Gaziantep cuisine, is increasingly popular during the winter months due to the vegetable's protective antibodies against the flu.

Famous for its variety of dishes and wide range of flavors, Gaziantep cuisine was featured by UNESCO in the "Creative City Network," a program which features some of the best local eats from distinguished gastronomic regions. Onion kebab, one of the signature dishes of Gaziantep cuisine, is just one menu selection which is widely preferred by locals during the fall and winter seasons. The onion kebab, made with its namesake vegetable that is known as a natural antibiotic that prevents and helps treat cold and flu illnesses, is one of Gaziantep's main attractions in gastronomy tourism, enjoyed by locals as well as foreign tourists with its unique look and taste.

Dietitian Demet Taş of Gaziantep University Şahinbey Research and Practice Hospital told an Anadolu Agency (AA) reporter that the onion has several beneficial properties, including vitamins A, B, C, phosphor, iodine and sulphur. Stressing that onion is a natural antibiotic, Taş said: "Onion is good for skin problems as well as rheumatism. Moreover, it helps the body to expel excess water and urine. Onion enables the pancreas to function, increasing insulin excretion and decreasing blood sugar. Research has indicated that cancer is rarely seen in countries where onion is consumed at a high rate."

Taş, who said onion is also very good for treating tapeworms in the bowels, claimed that onion should especially be consumed during the flu season due to its protective antibodies.

Kebab master Beyhan Ölçal, who learned how to cook kebab from his father and has practiced the same method for the last 40 years, said that Gaziantep cuisine is as visually appealing as it is mouthwatering.

Both the restaurant owners and the Gaziantep Metropolitan Municipality have worked very hard for Gaziantep cuisine to be recognized by UNESCO, saying that Gaziantep locals love to eat and host loved ones in their homes, where tables are covered with local dishes.

Claiming that onion kebab is the number-one choice of locals as well as tourists at this time of the year, Öçal said: "Onion kebab is known for strengthening the immune system and protecting the body against the flu. This is why it is mostly preferred during winter. This natural antibiotic, in the form of onion kebab ,is eaten in one of two ways. First, it is either cooked in an oven with pomegranate syrup or it is cooked over an open flame on a shish. This special kebab is made with the meat that is found in the belly of sheep because that part is very soft. We mince this meat and place it between the onions before laying them on a tray. Then, the meat and the onions are covered with a sauce made from black pepper, pomegranate syrup and water. This sauce is added before the meat is cooked. Onion kebab is in high demand during this season in Gaziantep."
RELATED TOPICS