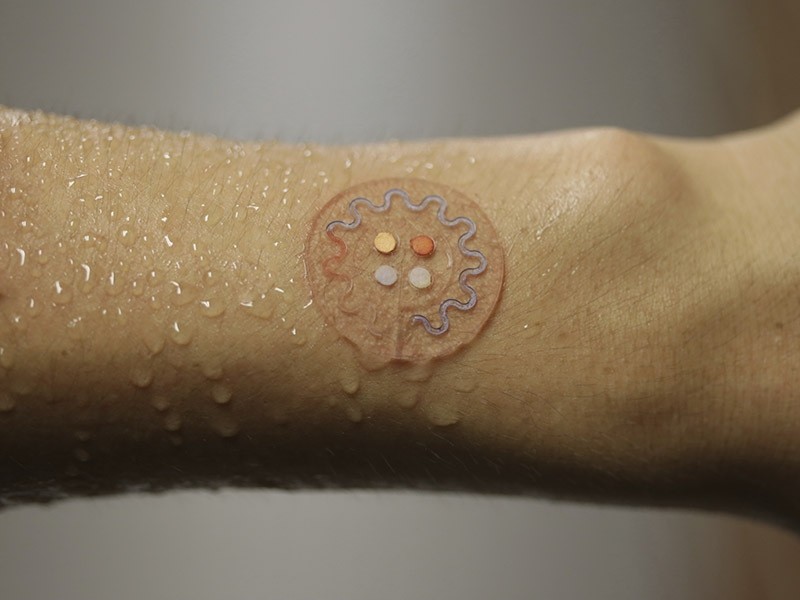 Researchers created a skin patch that can test droplets of sweat to track health while people exercise, beaming results to their smartphones. (AP Photo)
by reuters Nov 23, 2016 12:00 am

Scientists in the United States have developed a flexible microfluidic device that easily sticks to the skin and measures sweat levels to show how the wearer's body is responding to exercise.

The low-cost device, which can quickly analyze key elements such as lactate, Ph or glucose levels and let the user know if they should stop or change their activity, could also in future help diagnose and monitor disease, the researchers said.

"Sweat is a rich, chemical broth containing a number of important chemical compounds with physiological health information," said John Rogers, a professor Northwestern University in the United States who led the development of what he called a "lab on the skin"

Reporting results of the trial of the device in the journal Science Translational Medicine, the researchers said one of its attractions is that it allows people to monitor their health on the spot without the need for blood sampling.

The device, a slim, flexible patch measuring less than a couple of centimeters across, has integrated electronics that do not need batteries and can connect wirelessly to a smartphone.

Rogers explained that during exercise, sweat winds through the tiny microscopic channels of the device and into four compartments. Here, it reacts with chemical reagents to produce color-based readings relating to pH and to concentrations of glucose, chloride and lactate.

The wireless electronics trigger a smartphone app that captures and analyses the image to give the results.

Rogers' team tested the device on two groups of athletes - one cycling indoors under controlled conditions and the other taking part in a long-distance ride in tough and dry conditions.

The sweat monitoring patch was placed on the athletes' arms and backs to test its accuracy and durability.

Results showed that with the indoor cyclists, the device's measurements and readouts were as good as conventional laboratory analyses of the same sweat. In the long-distance cyclists, the device proved robust - it stayed in place, did not leak, and provided good quality readings.

Designed for one-time use of a few hours, the device can also detect a biomarker for cystic fibrosis, Rogers said, suggesting it could be adapted in various ways to help diagnose disease or monitor health in people with chronic illnesses.