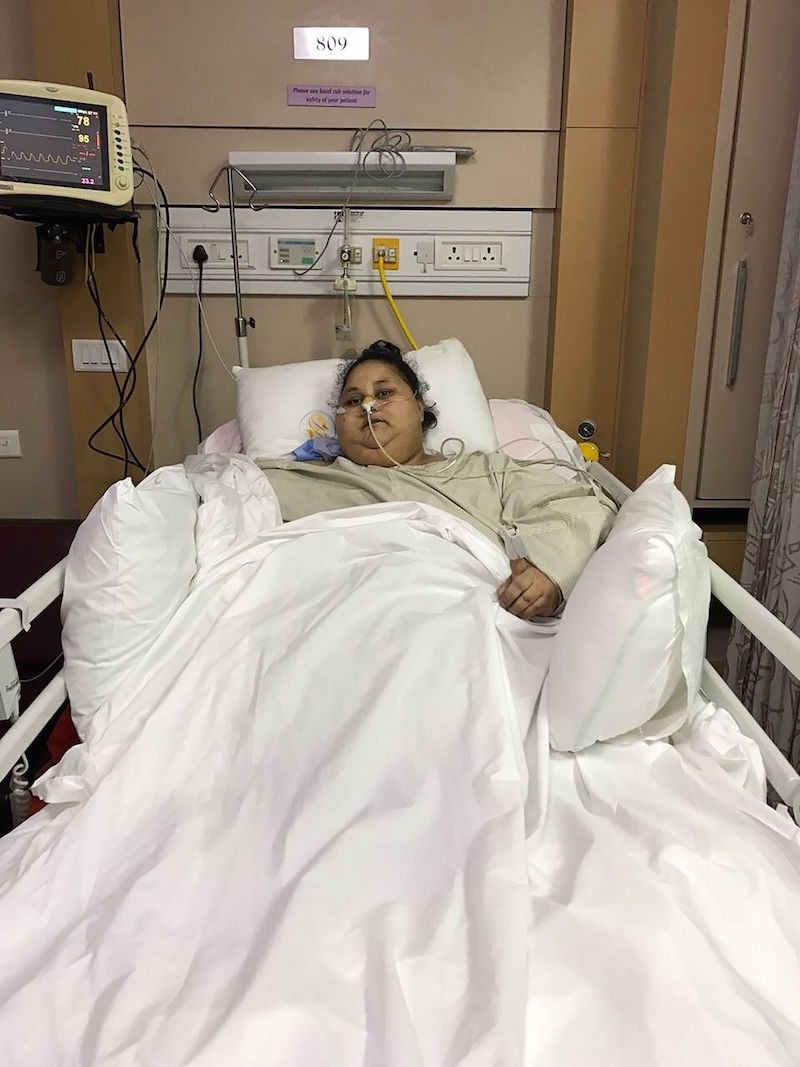 An Egyptian who is believed to be the world's heaviest woman has successfully undergone a weight-loss surgery after losing over 100 kilograms (220 pounds), doctors in India announced Thursday.

Eman Ahmed Abd El Aty, who previously weighed around 500 kilos (1,100 pounds), had not left her house in Egypt in over two decades until arriving in Mumbai last month for bariatric surgery.

"We are happy to inform all well-wishers that the medical team of Saifee Hospital has successfully performed the surgery on Eman Ahmed," said a statement.

"Eman successfully underwent a Laparoscopic Sleeve Gastrectomy March 7 at Saifee Hospital. She had an uneventful surgery and anaesthesia course.

"She is now on oral fluids and accepting them well. The future course of action for the medical team working on her will be to correct all her associated medical problems, to get her fit enough to fly back to Egypt as soon as possible," it added.

A spokeswoman for Dr Muffazal Lakdawala, who is leading Abd El Aty's treatment, said the 37-year-old Egyptian's weight had been brought under 400 kilograms since she arrived in Mumbai in early February.

"Eman has lost over 100 kilograms and has been shedding weight gradually on a daily basis with all the treatment and support," she told AFP.

The Egyptian is still believed to be the world's heaviest woman ahead of American Pauline Potter who the Guinness Book of World Records recorded at 293 kilos in July last year.

Abd El Aty, who is from the Mediterranean port city of Alexandria, was flown to India's commercial capital in a specially modified Airbus Saturday February 11 for treatment.

Her family told the doctor that as a child she was diagnosed with elephantiasis, a condition that causes the limbs and other body parts to swell, leaving her almost immobile.

Abd El Aty has suffered a stroke and faced a series of other serious ailments owing to her weight including diabetes, high blood pressure, hypertension and sleep deprivation.

Her request for an Indian visa was initially denied, but she was granted passage after tweeting a plea for help directly to India's foreign minister, who intervened.

Abd El Aty had a long wait, as no airlines were willing to fly her due to her health complications.

Lakdawala's team put her on a special liquid diet when she arrived in India to get her weight down to a low enough level for them to be able to operate.

They say she is now able to sit up and is expected to spend several months being monitored and receiving physiotherapy to exercise her muscles before returning to Egypt.

Bariatric surgery is a stomach-shrinking bypass procedure carried out on those wanting to lose excessive weight.

It is increasingly common in India, which has a growing problem with obesity, particularly in urban areas.

India is a major destination for medical tourists seeking quality services and no waiting lists at a fraction of the cost of western countries.