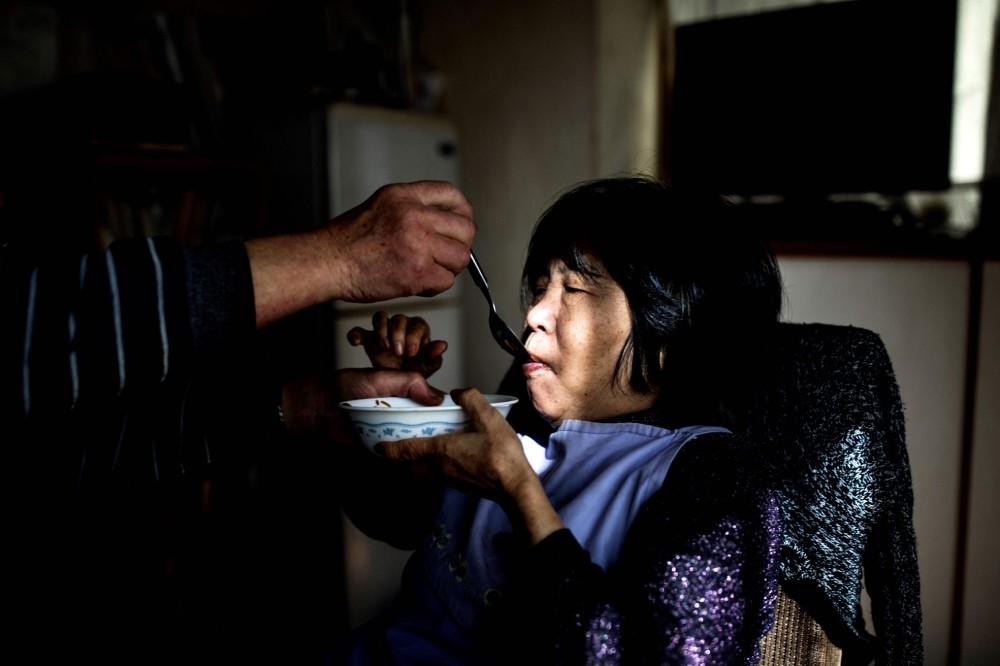 Kanemasa Ito compares caring for his wife Kimiko to waging a daily war with the devil. The woman he loved has all but disappeared - lost to dementia, she can no longer eat, bathe or go to the toilet alone.

"There is a demon inside her head," Ito told AFP, articulating the dramatic change in the person he'd built a life with, while she babbles nonsensically.

One of the world's most rapidly ageing and long-lived societies, Japan is at the forefront of an impending global healthcare crisis. Authorities are bracing for a dementia timebomb and their approach could shape policies well beyond its borders.

By 2025, one in five of the over 65s - around 7.3 million people - in Japan will have dementia, the health ministry estimates, up from around 4.6 million now.

Alzheimer's Disease, a syndrome in which cognitive ability, emotional control, and social behavior deteriorate, accounts for the majority of cases.

Ito's wife was just 54 when she was first diagnosed. Now some 15 years on, he is close to the breaking point trying to care for her and manage the disease.

No longer able to discern what is harmful from what is safe - Kimiko has previously tried to drink cleaning products, unaware of the hazard of ingesting them - she needs constant supervision.

"It exhausts me," the 73-year-old confessed in an interview at their Kawasaki home.

Their story is becoming increasingly common in a country where a lack of resources and caregivers means the burden falls increasingly on spouses and children.

Prime Minister Shinzo Abe is aiming to increase the number of nursing homes and raise care worker wages to tackle the problem.

There is also a goal to ease the burden of family caregivers and reduce the number of people who quit work -- such as Ito - to care for dementia-stricken relatives - from 100,000 a year to zero.

Many developed countries are already facing challenges on how to fund care, but Japan's issue is pronounced because its population has aged at a faster pace.

According to a 2016 OECD report, Japanese social spending as a percentage of GDP stands at 23.1 percent, lower than other developed countries with high percentages of elderly people, such as France and Italy.

The government, he said, simply can't achieve its goals without more money.

But a cash injection seems unrealistic given that Japan's public debt is already more than twice the size of its economy.

And with a shrinking and ageing population and workforce, some elderly with higher incomes are already being forced to pay more out of pocket for nursing care expenses under the national insurance scheme.

The overwhelming mental, physical and economic burden of care-giving has led to tragedy.

The total number of cases of abuse of the elderly rose to 16,384 in the fiscal year 2015 -- up from 12,623 in fiscal 2006, the majority of which involved relatives, according to figures from the health ministry.

The reality of caring for an incapacitated loved one can push people to the brink.

One 50-year-old Tokyo resident who has been taking care of his 85-year-old dementia-stricken mother for six years, told AFP he had murderous thoughts about her.

"I seriously want to manage my anger because I might kill her if I explode," said the man, who requested anonymity.

"I can imagine her being dead in front of me," he added. "It scares me."

Between 1996 and 2015, there were 754 murder-suicide cases involving family caregivers, mostly men, in Japan, according to a study by Etsuko Yuhara, an associate professor of welfare at Nihon Fukushi University.

Ito, who had closed a convenience store he used to run to take care of his wife, said he hopes the government will create a better environment for caregivers.

"Every day is a battle," he said, referring to how Kimiko resists getting dressed in the morning and having her hair washed at night.

He regularly takes Kimiko out for a walk in a nearby park and grocery shopping, but it is hard to know if she is aware of what is happening.