Millions of yoga practitioners hit the mat for international event 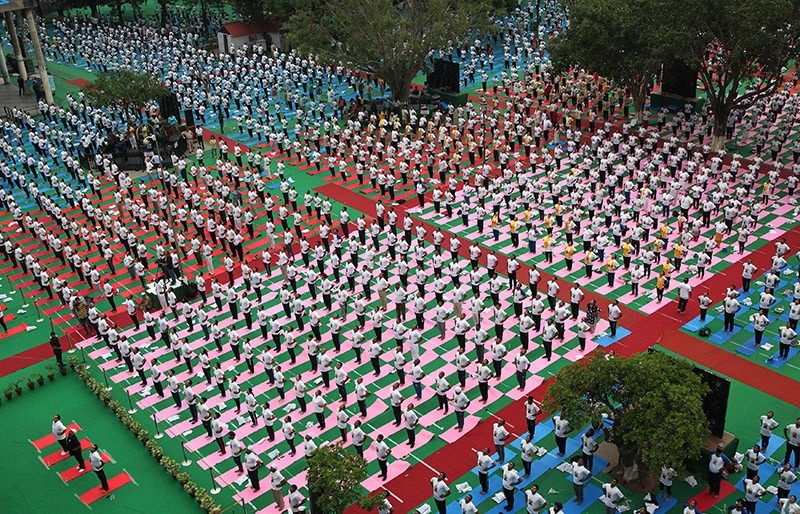 From the deck of an aircraft carrier to the sub-zero temperatures of a Himalayan military outpost, tens of thousands of Indians joined Prime Minister Narendra Modi on Wednesday to celebrate the third International Yoga Day.

Rains failed to dampen the spirits of about 50,000 people who joined in an outdoor yoga session with the prime minister in a park in Lucknow, capital of the northern state of Uttar Pradesh.

"Yoga is about health assurance. It is not even expensive to practice," he added.

"Yoga connects body, mind and soul. It is playing a big role in bringing the world together too," Modi said after performing various poses.

Modi, who credits his strict yoga regime for his ability to work long hours on little sleep, has been spearheading an initiative to reclaim the practice as an historic part of Indian culture since his Hindu nationalist government came to power in 2014.

He has set up a ministry dedicated to promoting yoga and other traditional practices and persuaded the United Nations to create a dedicated International Yoga Day, a move seen as a triumph of soft power.

On Wednesday the UN headquarters in New York lit up with images of poses, among the events being held across more than 100 countries to mark the third International Yoga Day.

The Modi's official Twitter handle, which has more than 30 million followers, has posted pictures of mass yoga sessions in China, Colombia, the United States, Paraguay, Mexico, Italy, Singapore and atop Machu Picchu, a 15th century Inca citadel in Peru.

Social media was flooded with pictures of yoga, the country's signature cultural export, being performed in various places including an Indian Navy submarine and the landing deck of an aircraft carrier.

"It is not only the world's longest serving aircraft carrier but also the world's longest-serving warship. I think the ship must have done lots of pranayaams to be sustaining for so long," top naval officer Puneet Chadha told a TV channel, referring to a yogic breathing technique.

In the western city of Ahmedabad, 125,000 led by celebrity yoga guru Baba Ramdev gathered at an open-air ground to try to set a new Guinness World record for the largest session.

Police in New Delhi closed roads to make room for a mass yoga session held amid tight security in the heart of the capital.

"When all of us, at the same time, do the same movements, it feels special. The energy is different," said 24-year-old Abhi Aggarwal as he waited with his parents for the session to start.

Indian scholars believe yoga dates back 5,000 years, based on archaeological evidence of poses found inscribed on stones and references to Yogic teachings in the ancient Hindu scriptures of the Vedas.