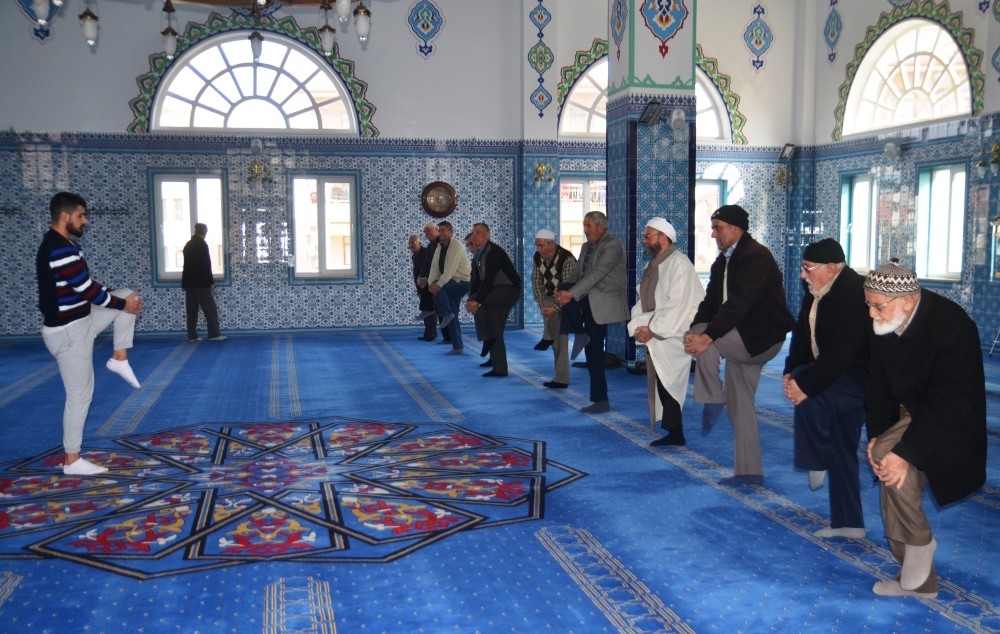 Three students in the teaching department of Kütahya Dumlupınar University's (DPU) School of Physical Education and Sports have developed a project called "Five Times Prayer, One Time Exercise." Prepared for the class Servicing Practices for Society, the project offers exercises for the elderly after their prayers. As part of the project, the students visit nearby mosques after prayers and have the elderly do gentle exercises once a day.

Oğuzhan Buluşlu, Yunus Ulucan and Recep Karademir, who lead the crowd in the exercises, are appreciated both by the imam and the worshippers.

Speaking to Anadolu Agency (AA), Buluşlu said they have started to try out their class project at nearby mosques. With this project, the students hope to encourage the elderly to exercise more. "We initiated the project at four nearby mosques and conducted the study to help the elderly sustain healthier lives through exercise. It's been about one month since we put the project into practice, and we hope to introduce the project to more mosques. The Religious Affairs Administration and Mufti Office also support our efforts. We have received positive feedback from our faculty about the project and hope that it will promote exercise among the elderly, which could lead to healthier lifestyles. Hence, we will contribute to our nation and country with our project," Buluşlu explained.

Osman Arslan, an imam, expressed his support of the project and congratulated the students on their ingenuity, saying: "This three-person project is really amazing. It's attracted the attention of people visiting the mosque. We will always support these types of activities initiated by young people and thank them for their contributions."

One of the elderly worshippers, retired officer Mustafa Kandemir, said, "I think exercise is really beneficial for our health, and I'm happy to be involved in this project."

Another participant, Bayram Çetiner, said: "Exercise is always a good thing. It's very important, especially for old people like us. You give up a lot when you get older, but exercising shouldn't be one of those things. I'll do my best not to give up being active as long as I'm healthy enough to move."