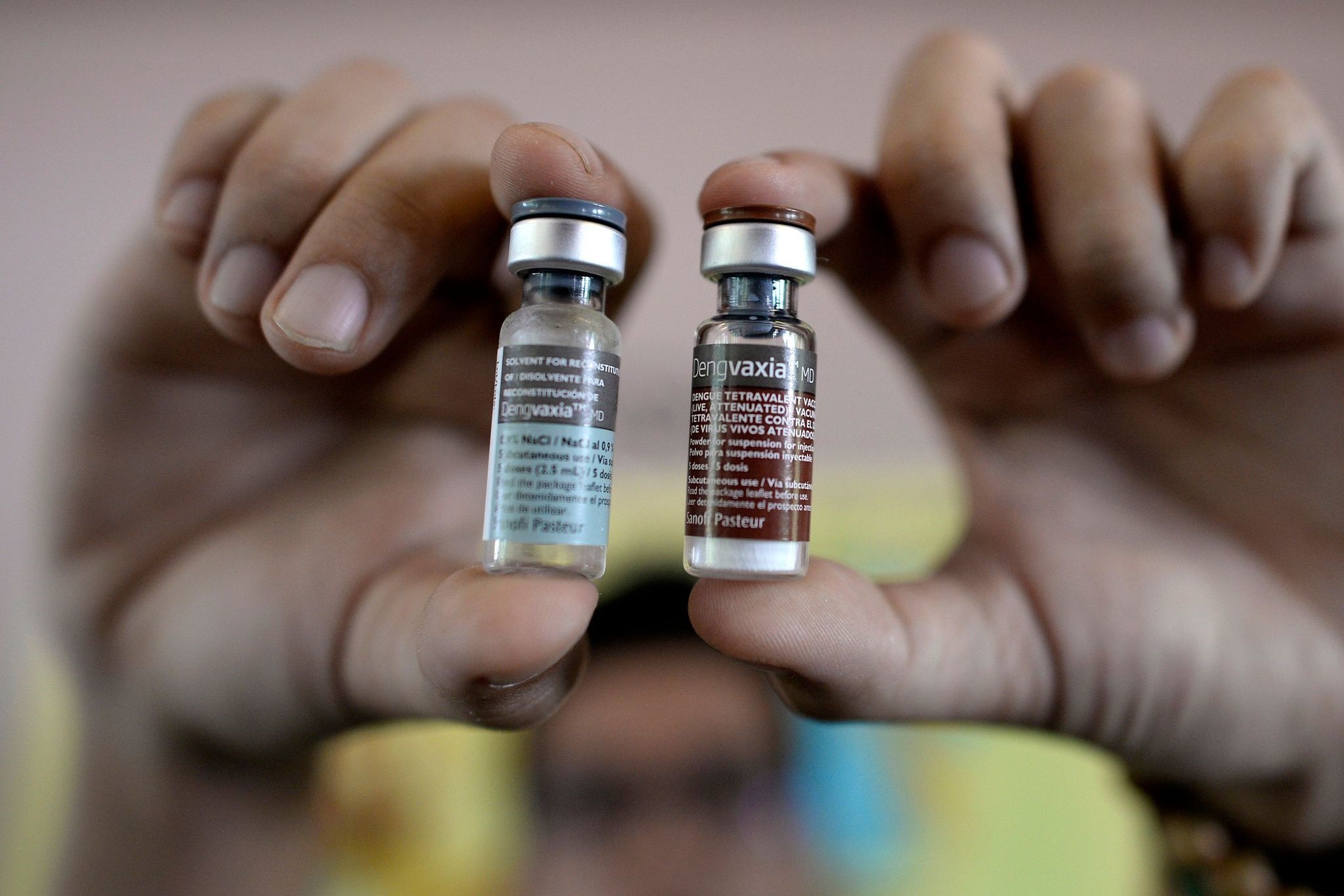 This file photo taken on April 4, 2016 shows a nurse showing vials of the anti-dengue vaccine Dengvaxia, developed by French medical giant Sanofi, during a vaccination program at an elementary school in Manila. (AFP Photo)
by Dec 01, 2017 12:00 am

The Philippines said Friday it had suspended use of a landmark vaccine for the potentially deadly dengue virus after its manufacturer warned it could worsen the disease in some cases.

French pharmaceutical giant Sanofi announced Wednesday that its world-first dengue vaccine could lead to more severe symptoms for people who had not previously been infected.

The Philippines has vaccinated more than 733,000 children with Dengvaxia since 2016 when it became the first country to start using it on a mass scale.

But it said Friday the program had been suspended.

"In the light of this new analysis, the DOH (Department of Health) will place the dengue vaccination program on hold while review and consultation is ongoing with experts, key stakeholders, and the WHO (World Health Organization)," Health Secretary Francisco Duque said.

Sanofi had initially said its Dengvaxia vaccine was "critical" in the fight against dengue, the world's most common mosquito-borne virus.

It said Wednesday that a new study has confirmed Dengvaxia's benefits for "those who had prior infection".

"For those not previously infected by dengue virus, however, the analysis found that in the longer term, more cases of severe disease could occur following vaccination upon a subsequent dengue infection," Sanofi said.

Duque stressed that the government had not yet received reports of any problems with Dengvaxia.

"Currently, there is no reported case of severe dengue infection among those who received the vaccine," he told reporters.

Duque said the new findings did not mean all those who have never been infected would get severe dengue if they were vaccinated.

But he said the department would strengthen its ongoing surveillance of those who received Dengvaxia and would investigate any cases of people falling ill.

Despite the suspension, Duque said "vaccination is essential to the integrated approach in dengue prevention and control."

Asked about any legal liability that might arise from the vaccine, Duque said "our legal services plan to review the contract" with Sanofi.

The WHO said in a statement that in the light of the new findings, "as a precautionary and interim measure, WHO recommends that Dengvaxia is only administered to subjects that are known to have been infected with dengue prior to vaccination."

The WHO's advisory group on vaccination, the Strategic Advisory Group of Experts (SAGE), will meet in two weeks to decide if the suspension should remain in force, it added.

Dr. Julius Lecciones, director of the Philippine Children's Medical Center, said they had also received no reports of severe illness from Brazil, another country that has used the vaccine on a wide scale.

In Thailand, authorities have allowed the vaccine to be used in private hospitals on a case-by-case basis since September 2016, but it is not yet approved for state facilities, said Suchada Jiamsiri, deputy director of the health ministry's Division of Vaccine Preventable Disease.

"So the vaccine is not available in public programmes in Thailand," she added.

Jiamsiri said Thai health agencies had planned on consulting with WHO experts on the matter.

More than 1,000 people in the Philippines died from dengue last year, out of more than 211,000 suspected cases, according to the government.