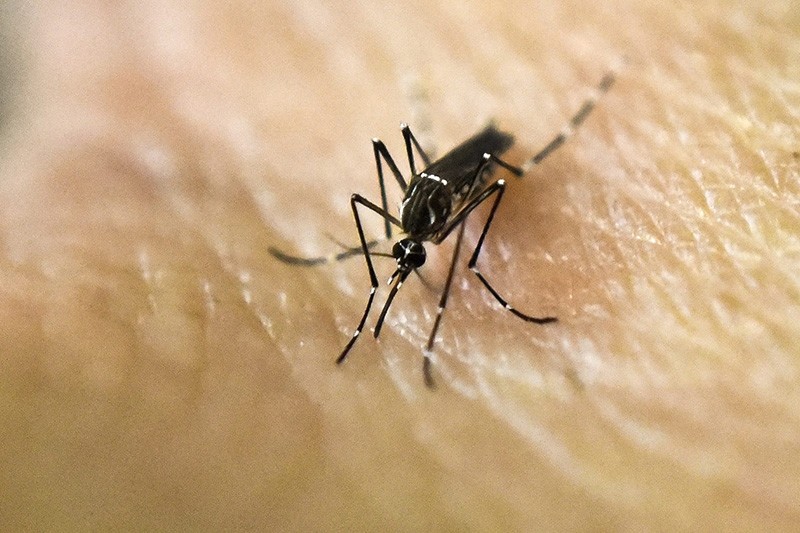 This file photo taken on January 25, 2016 shows an Aedes Aegypti mosquito photographed on human skin in a lab of the International Training and Medical Research Training Center (CIDEIM) in Cali, Colombia. (AFP Photo)
by Daily Sabah Jan 10, 2018 12:00 am

Turkey's Ministry of Health is planning precautions against the deadly Zika virus, which could develop within the next seven years, according a report by the ministry.

The ministry's Health Risks Warning Department issued an advisory report covering the risks, exposure and context of the virus in Turkey.

According to the report, which was reviewed by daily Milliyet on Jan. 9, cases of the virus have been detected in some mosquitoes in the northeastern Black Sea region and across the Crimean Peninsula.

"New Zika virus cases are likely to be detected," the report states. "However, the virus-infecting mosquito is currently restricted to certain regions of the country and this has limited the spread of the disease."

High risk for Zika remains confined to Latin America, Sub-Saharan Africa and parts of Southeast Asia. However, Turkish scientists predict a possible spread across central Turkey "in five to seven years" as "Aedes" mosquito populations, responsible for spreading the disease, may multiply in Turkey.

Besides eastern Turkey, the Aedes Albopictus mosquitoes have also been identified in western Thrace and Istanbul, though cases of Zika have not yet been documented.

"The increasing number of international travelers, together with the possibility of preventive measures not being enforced at the right time, could cause serious problems in the future," the Health Ministry report said.

The Zika virus, first detected in 1947 in Uganda's Zika forest, produces symptoms including fever, trembling, pain and swelling of the lymph glands. It can also cause severe brain malformations and birth defects in newborns when transferred from an infected pregnant mother to her baby.

Zika hit Latin America and the Caribbean particularly hard in 2015, spreading to over 50 countries by mid-2016.

Though the number of cases in the Western Hemisphere have declined thanks to preventative measures, WHO has urged priority be given to the development of a vaccine against the virus, particularly one that is safe for women.