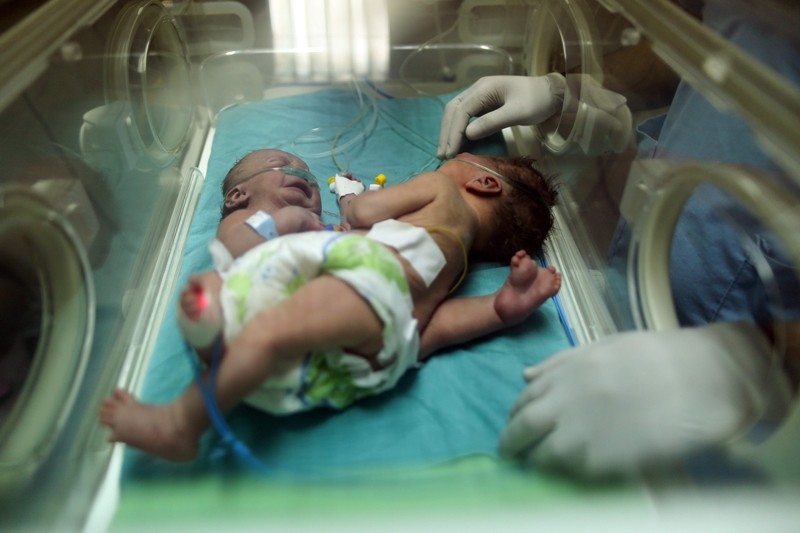 This file photo taken on October 22, 2017 shows then one-day-old Palestinian conjoined twins in an incubator at the nursery at al-Shifa Hospital in Gaza City. (AFP File Photo)
by Jan 13, 2018 12:00 am

One of the Palestinian conjoined twins from the Gaza Strip separated this week in surgery in Saudi Arabia has died but her sister is recovering, the kingdom said Saturday.

"Haneen is in stable condition and on her way to recovery five days after being surgically separated from her clinically dead sister, Farah," the Saudi information ministry said.

"Haneen is breathing normally and is receiving her nutrition intravenously," said Dr. Abdullah al-Rabiah, who led the operation team.

Rabiah said that all of the Palestinian infant's vital signs were now stable and that she had been removed from an artificial respirator.

The operation was carried out on Monday and involved the separation of multiple organs, including the liver, as well as restoring organs in Haneen.

The surgery came months after a doctor and family member of the twins pleaded from Gaza that they be allowed to go abroad for the complex surgery.

Allam Abu Hamda, head of the neonatal unit at Gaza's Shifa Hospital, told AFP in October the girls were born joined at the stomach and pelvis and that the complicated condition could not be dealt with in the enclave.

Israel has maintained a blockade of the enclave for a decade, citing security fears concerns.