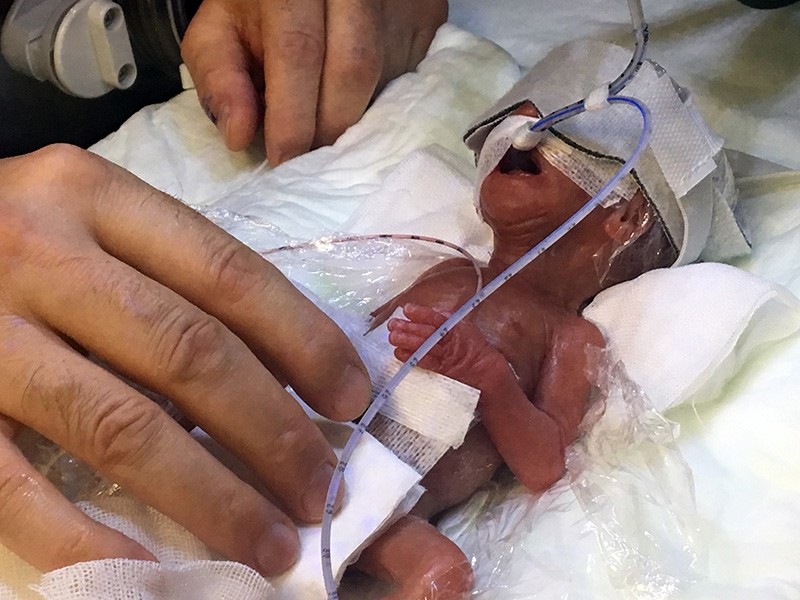 After trying to conceive for 10 years, a Turkish woman in southern Konya province gave birth prematurely to the smallest baby boy in the world Wednesday, weighing 310 grams (10.9 ounces).

The baby was born at 24 weeks gestation - 16 weeks early - after high blood pressure reduced blood flow to the baby, forcing doctors into the difficult choice of delivering the baby early through caesarian section at Selçuk University Medical Faculty Hospital.

Parents Mehmet and Saniye Karacan, who had undergone three in vitro fertilization (IVF) procedures since they married 11 years ago, joyfully welcomed their tiny baby Tuğra into the world.

Doctors hope the baby Tuğra will survive if a critical issue with his lungs can be fixed.

"If the problem [with the lungs] can be solved, there's a high chance of survival," said Dr. Ali Acar of Necmettin Erbakan University's Faculty of Medicine.

The baby's mother, who is still in the hospital, says although she hasn't seen her firstborn yet, she's happy.

"As soon as I get out of the hospital, I will go to see my baby," she said.

The smallest premature boy to survive was Jonathon Whitehill who weighed 310 grams (10.9 ounces) at 25 weeks.