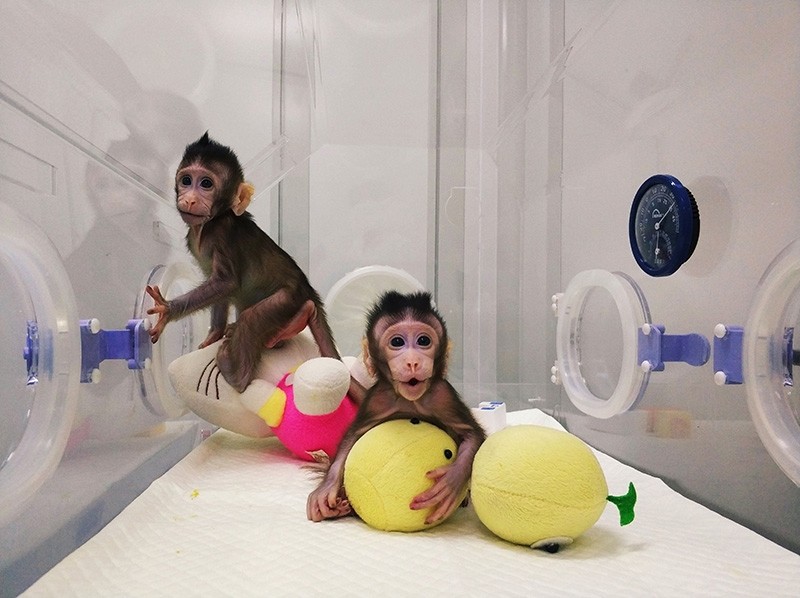 This handout picture from the Chinese Academy of Sciences Institute of Neuroscience, taken on January 20 and released on January 24, 2018 shows monkey clones ,Zhong Zhong, (L) and ,Hua Hua, at a research institution in Suzhou (AFP Photo)
by Daily Sabah with Agencies
Jan 25, 2018 12:00 am

The cloning was achieved through a process called somatic cell nuclear transfer (SCNT), which involves transferring the nucleus of a cell, which includes its DNA, into an egg which has had its nucleus removed.

"Our work should be a boon to medical research by making it possible to study diseases in populations of genetically uniform monkeys," researchers at the Chinese Academy of Sciences Institute of Neuroscience in Shanghai said in a conference call with Reuters.

The research also brings science one step closer to cloning our own species.

"Humans are primates. So (for) the cloning of primate species, including humans, the technical barrier is now broken," Muming Poo, supervisor for the program said.

Scientists who conducted the research at the Shanghai institute said they have followed international guidelines for animal research set by the U.S National Institutes of Health, but called for a debate on what should or should not be acceptable practice in primate cloning.

Other monkeys have been cloned in the past, by a different and simpler technique called embryo splitting, which mimics how twins arise naturally.

The first primate ever cloned this way was Tetra, a rhesus monkey born in 1999.

Embryo splitting can produce a maximum of four at a time, while the new technique could in theory clone far more.

Still, the process that produced Hua Hua and Zhong Zhong remains "very inefficient and hazardous," because the two babies were the only born from a group of 79 cloned embryos, said British scientists Robin Lovell-Badge, group leader of The Francis Crick Institute.

"While they succeeded in obtaining cloned macaques, the numbers are too low to make any conclusions," said Lovell-Badge, who was not involved in the study.

"With only two produced it would have been far simpler to just split a normal early embryo into two, to obtain identical twins."

Nor do the findings, published in the US journal Cell, bring scientists any closer to human cloning, Lovell-Badge argued.

"This clearly remains a very foolish thing to attempt, it would be far too inefficient, far too unsafe, and it is also pointless."

Darren Griffin, professor of genetics at the University of Kent, greeted the paper with "cautious optimism" and called it "very impressive" from a technical standpoint.

"The first report of cloning of a non-human primate will undoubtedly raise a series of ethical concerns, with critics evoking the slippery slope argument of this being one step closer to human cloning," he added.

"The benefits of this approach, however, are clear. A primate model that can be generated with a known and uniform genetic background would undoubtedly be very useful in the study, understanding and ultimately treatment, of human diseases, especially those with a genetic element."