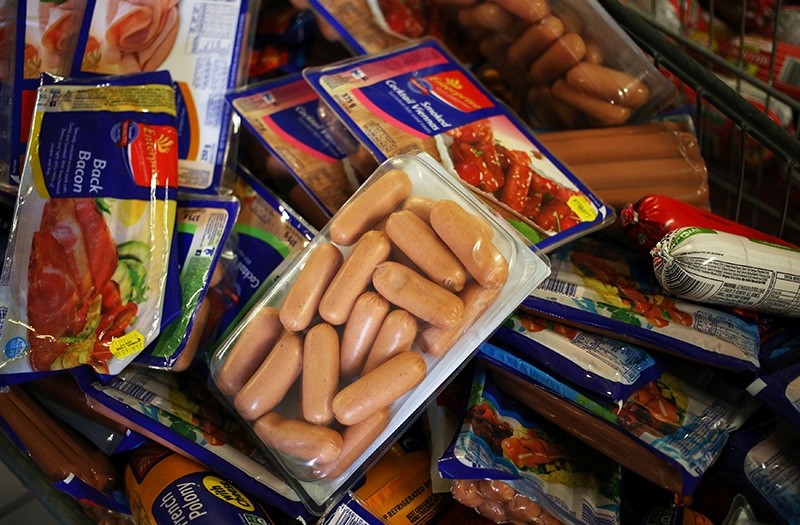 Cold meat products are seen in a cart after they were removed from the shelves of Pick n Pay Store in Johannesburg, South Africa, March 5, 2018. (Reuters Photo)
by Daily Sabah with Reuters Mar 05, 2018 12:00 am

South Africans were told Sunday not to consume ready-to-eat processed meat as the government identified the source of a listeria outbreak that has killed 180 people as a cold meat product made by the country's biggest consumer foods group.

The meat, known as "polony," made by Tiger Brands unit Enterprise Food and by RCL Foods, has been recalled from stores, Health Minister Aaron Motsoaledi said.

"We advise members of the public to avoid all processed meat products that are sold as ready-to-eat," Motsoaledi said, adding that, due to the risk of cross-contamination, all such foods were a potential health hazard.

On Monday, a Health Ministry representative said the government had long suspected the listeria outbreak was caused by cold meat products. However, they had not been able to obtain the requested samples for months "because the meat processing industry was not cooperating."

"The breakthrough came after pre-school children fell ill from eating polony, and we traced the polony to processed meat producers," the representative said.

"We can now conclude scientifically that the source of the present outbreak is the Enterprise Food production facility located in Polokwane," Motsoaledi told a briefing at the offices of the National Institute of Communicable Diseases.

Motsoaledi said although RCL Foods had not been identified as a source of the outbreak, a facility owned by the firm was under investigation. Inquiries were ongoing at a second facility run by Enterprise Foods to establish if it too had contributed.

Listeriosis, the infection caused by the bacteria, causes flu-like symptoms, nausea, diarrhea and infection of the blood and brain. It poses a higher risk for newborns, the elderly, pregnant women and people with weak immunity.

The outbreak has caused 180 fatalities and 948 reported cases since January 2017.