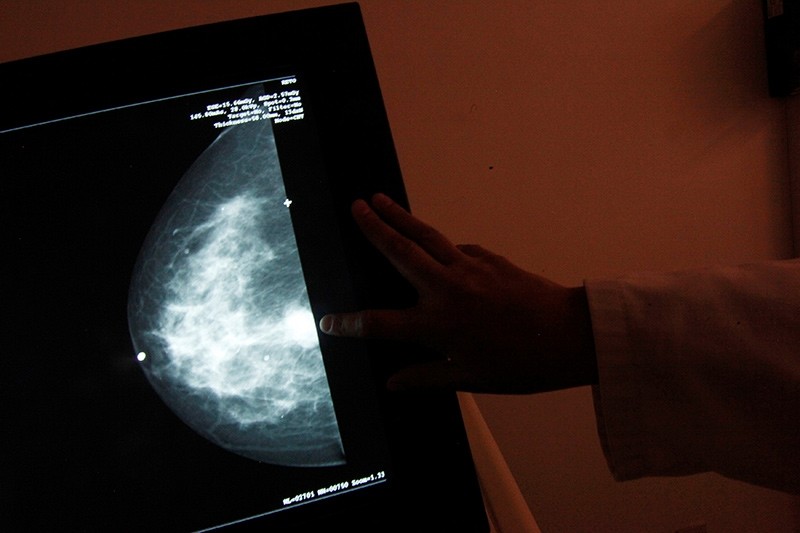 A monitor shows the image of a breast cancer at a centre run by the ,Reto, Group for Full Recovery of Breast Cancer in Mexico City (Reuters File Photo)
by Compiled from Wire Services May 03, 2018 12:00 am

Britain on Wednesday admitted that a "serious failure" in its breast cancer screening program over nearly a decade led to 450,000 women missing out on invitations to their final tests -- and may have shortened the lives of up to 270 of them.

Women in England between the ages of 50 and 70 are automatically invited for breast cancer screening every three years by the state-run National Health Service.

Jeremy Hunt said Wednesday in Parliament that the mistake appeared to be the result of a "computer algorithm failure" dating back to 2009.

"The fact is that for many years, oversight of our screening program has not been good enough," Hunt said. He said about 450,000 women aged between 68 and 71 weren't given a chance to have a mammogram. Of those women, Hunt said experts estimated up to 270 might have died prematurely.

"Many families will be deeply disturbed by these revelations," he acknowledged, adding that the glitch meant some breast cancers were only diagnosed at a later stage, when the disease might have been harder to treat. The risk of breast cancer increases with age.

Hunt apologized "wholeheartedly and unreservedly" for the suffering caused and promised there would be an independent review of the national breast screening program. Breast cancer screening is offered to all women aged 50 to 70 in England every three years; they are sent invitation letters to make an appointment for the test.

"Tragically, there are likely to be some people in this group who would have been alive today if the failure had not happened," Hunt said. He noted that all general practitioners would be briefed on how they should respond, and said the issue was first raised as a potential problem in January.

Hunt said that any women who missed their mammogram will be contacted by the end of May.

"It's very concerning to learn that so many women have not received an invitation to screening over a prolonged period of time," said Emma Greenwood, Cancer Research U.K.'s director of policy and public affairs, in a statement.

Greenwood said that many breast cancers are still found by women themselves, and recommended that women concerned about missing their test should contact their doctors.