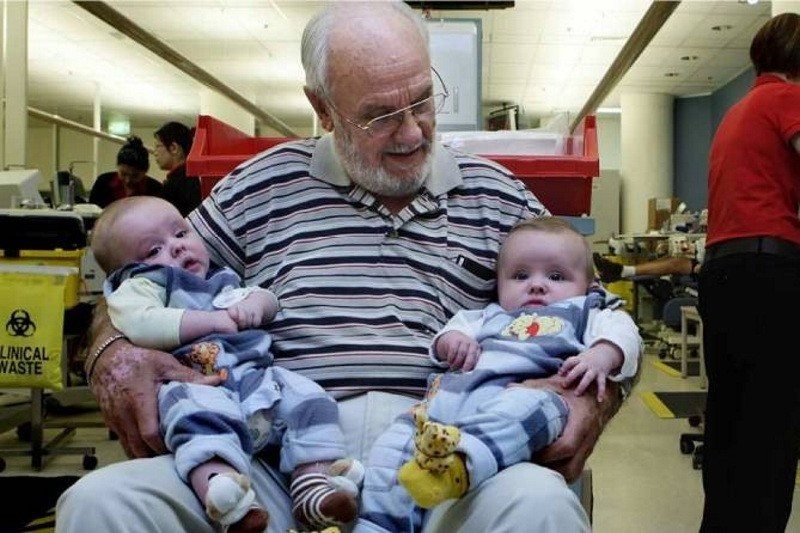 In 63 years of steady blood donations, James Harrison - and his rather rare blood type - is thought to have saved the lives of over two million unborn children. The 81-year-old Australian gave his last donation on Friday to a warm reception of grateful mothers.

On Friday, James Harrison gave his last blood donation. Surrounded by a group of young Australian mothers and their babies, the 81-year-old made the last of many donations at the Red Cross Blood Service center in Sydney's Town hall - 63 years after his first.

As the nurse drew the blood from his "Golden Arm," four numerical silver balloons could be seen behind him, making the number "1,173" - the total number of donations of blood plasma he has made.

"I hope it's a record that somebody breaks," says Harrison.

Those plasma have been turned into the life-saving medication Anti-D immunoglobulin, which is given to mothers whose blood is at risk of attacking, and sometimes killing, their unborn babies.

What makes Harrison's blood special is that he consistently produces high levels of antibodies - valuable in making the Anti-D injections.

The donations have helped more than two million Australian mothers deliver their babies safely, according to the Red Cross.

"I am here to say thank-you to James," says Beth Ismay, a 33-year-old mother of two, at the center with her seven-weeks-old daughter, Layla.

"I received four Anti-D injections while I was pregnant with Layla. I know his blood donation played a very big part in keeping my daughter safe," she told dpa, describing Harrison as "a miracle man."

Ismay had also received Anti-D injections during the birth of her first child, who is now "four-and-a-half and healthy and thriving."

Harrison's inspiration to donate came from his own health struggles as a 15-year-old, when he required 13 liters of transfused blood during major chest surgery.

It prompted him to start donating blood as soon as he turned 18 in 1954, long before health workers discovered the rare combination of Rh-negative blood and Anti-D antibodies in his blood.

Robyn Barlow, coordinator of the Rh program, the world's first donor program for Anti-D, recruited Harrison as the program's first donor back in 1966.

"James was already a donor, so it was easy. We explained it would mean increasing antibodies by giving more Rh-positive blood, to keep boosting the antibodies. He said okay and we started," said Barlow.

"It is amazing. The cure is so simple and 50 years on, we still depend on people like James to produce Anti-D. It has never changed. We have not found alternative ways of preventing the disease," said Barlow, who says finding other donors like Harrison is a struggle.

Harrison had been donating 500 to 800 milliliters of blood plasma every two weeks, only skipping sessions if he was traveling somewhere without a donation center.

"It is the end of an era. I have been donating for 63 years. I just have to find something else to do on Fridays," said Harrison, who can no longer donate due to an age exemption.

"I would have continued if they allowed me. If they change the system, I am just a phone call away," he says.

Around 17 per cent of all pregnant women need Anti-D shots in Australia, says the Red Cross, with even Harrison's own daughter among those to have received the injection.

"The mothers are Rh negative and they carry an Rh positive baby, due to positive-blood father," explains Sue Ismay, the scientific director of the Red Cross Blood Service.

The mother's immune system registers the baby's red blood cells as a foreign threat and produces antibodies to destroy them, which could possibly lead to stillbirths or miscarriages, says Ismay.

Before the breakthrough Anti-D discovery in the 1960s, haemolytic disease of the newborn used to kill thousands of babies in Australia per year.

Since 1967, more than three million doses of Anti-D have been issued with some of Harrison's plasma antibodies in all of them.

There are only about 165 such donors currently and attempts to create a synthetic Anti-D have not succeeded so far.

"Australia owes a big thank you to James Harrison," said the Red Cross in a statement. "Medications like Anti-D are a life-giving intervention for thousands of Australian mums, but they are only available because men like James give blood."