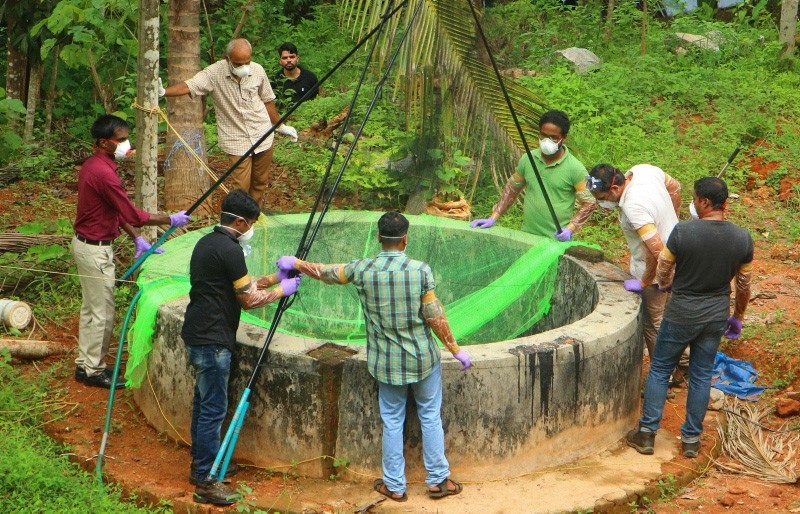 Animal Husbandry department and Forest officials inspect a well to to catch bats at Changaroth in Kozhikode in the Indian state of Kerala (AFP Photo)
by Compiled from Wire Services
May 22, 2018 12:00 am

A rare virus spread by fruit bats, which can cause flu-like symptoms and brain damage, has killed 10 people in southern India, health officials said on Tuesday, with at least two more cases being monitored.

Infectious disease outbreaks can be a challenge in the world's second most populous country, where infection control and surveillance are weak, leading to hundreds of deaths annually from diseases such as mosquito-borne dengue.

There is no vaccine for the Nipah virus that has broken out in Kerala state. It can cause encephalitis, or inflammation of the brain, the World Health Organization says. The usual treatment is supportive care.

The first death happened on Friday in the district of Kozhikode, said K.K. Shailaja, health minister of the state, a magnet for tourists.

"This is a new situation for us. We have no prior experience in dealing with the Nipah virus," said Shailaja. "We are hopeful we can put a stop to the outbreak."

Of 18 people screened for the virus, 12 came back positive, she told a news conference, adding that 10 of them had died, with the other two being monitored closely.

Three of the victims, members of the same family, are suspected to have been infected by bats that crowded a well near their home, said a local government official, U. V. Jose.

"We have closed the well and evacuated the people living nearby," said Jose, adding that federal health officials who visited the area were investigating.

The deaths had sparked concern among residents, he added.

"A large number of people affected by fever, and even minor ailments, are swarming to hospitals, fearing they have contracted the disease," Jose said.

"We've sought the help of private hospitals to tide over the crisis."

Health surveillance has been stepped up across Kerala, the state's health secretary, Rajeev Sadananda, told Reuters.

The virus was first detected in Malaysia in 1998, and India's eastern state of West Bengal has suffered two outbreaks in the last decade, killing 50 people, the WHO has said.

There is no vaccine for Nipah, which can cause raging fevers, convulsions and vomiting, and kills up to 75 percent of people who come down with it. The only treatment is supportive care to control complications and keep patients comfortable.