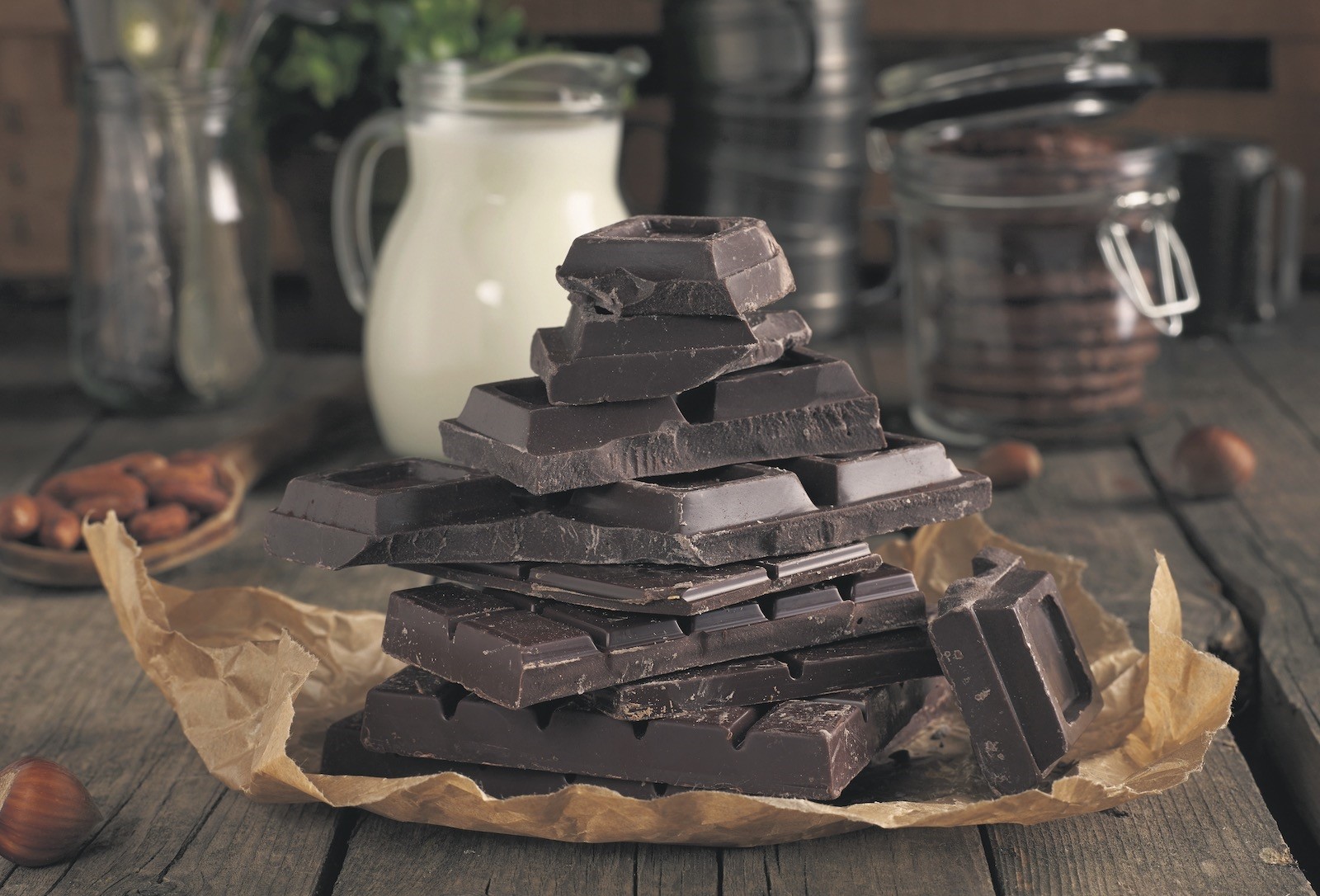 Chocolate is the best comfort food, the first thing that comes to mind when you crave something sweet and it comes with a lot of health benefits. But do not be fooled: Having too much of anything, even if it is healthy, can be harmful

Who doesn't love chocolate? Do you know that a small amount of bitter chocolate has many benefits, such as changing your mood and reducing cholesterol? Although it is notorious for fattening you, this delicious food is also beneficial to your health. When you read this article, you will not feel guilty when you eat chocolate.

Chocolate is made of the seeds of Theobroma, the cacao tree, its earliest use was in the Olmec civilization in Mesoamerica. After the American continent was discovered, chocolate became popular and was spread around the world, with people's demand increased day by day.

What is the best chocolate?

The darker a chocolate is (if it includes 70 percent cacao or more), the higher the flavonoid content it has. Foods such as broccoli, onion, fruit and tea contain flavonoids and protect people against some cancer and heart diseases. Therefore, we can say that bitter chocolate is healthier. According to some research, people consume an average 4.5 kilograms of chocolate in a year. Well, what benefits does this food, which is so irreplaceable for people, have?

As chocolate contains cacao oil which is rich in saturated fat, it is known to be harmful to health. However, cacao oil, which is another form of saturated fats, like coconut oil, can be beneficial for your health, as well. One-third of the fat in cacao oil is a stearic acid which turns into healthy monounsaturated fats, which are called oleic acid, in your liver. Oleic acid actually decreases the bad cholesterol level (LDL) and increases the good levels (HDL). Besides, poly anti-inflammatory compounds in cacao help in the struggle against chronic vascular inflammation. They increase the flexibility in blood vessels and then decrease blood pressure.

In another research study, scientists from Harvard Medical School asserted that drinking two cups of hot chocolate a day can help the brain stay healthy and help the decrease of memory loss in the elderly. Researchers discovered that hot chocolate develops blood flow to the required parts of the brain.

Stress causes an increase in the level of cortisol in your body. This situation, unfortunately can affect those with depression and can cause heart diseases and stroke. In research in 2009, the cortisol level of those who eat 40 grams of chocolate every day for two weeks decreased in comparison with cortisol levels at the beginning. Other research in the following year revealed that people who eat chocolate for 30 days have 10 percent lower anxiety levels, and people feel more relaxed.

Gives a boost to exercises

You need to increase your energy level before exercises. Chocolate will help you both to increase your energy and prevent pain. Two antioxidants in cacao, catechins and epicatechins, increase absorption of foodstuffs that produce energy in your muscles, therefore, they help you through the exercise, giving you an energy boost. In research on laboratory animals, a 30 percent increase was seen in resistance to tiredness after the regular use of these energy-giving antioxidants for two weeks. Similarly, anti-inflammatory compounds in cacao can cause a fivefold decrease in pain after exercises. The best way to utilize the benefits of chocolate is to eat some bitter pieces after you exercise.

Works showed that consuming chocolate rich in antioxidant cause more humid, smooth skin which is resistant against sunburn. In research in the European Journal of Nutrition, it was discovered that those who regularly consume cacao for 12 weeks decreased moisture loss in their skin at the rate of 25 percent. Besides, consuming chocolate decreases sunburn. British researchers gave bitter and milk chocolate to two female groups for 12 weeks. At the end of the research, it was observed that the women in the group who consumed bitter chocolate doubled the protection against ultraviolet rays while there was no change in the other group. Cacao pushes blood circulation to the thin capillary vessels on the layer of the skin and to other vessels which protect the skin against dehydration and burns.

The sugar in chocolate can cause tooth decay but cacao protects your teeth. Cacao nibs contain antibacterial compounds which prevent dental plate and biofilms on which bacteria that cause gaps can grow. In research on children who did not brush their teeth for four days, it was seen that mouthwash with cacao killed 21 percent of bacteria in one go.

Too much of anything is harmful

Do not forget that chocolate is a food that contains a high amount of sugar and has a high calorie count. Therefore, it is a good idea to limit chocolate consumption if someone wants to lose weight or try to protect his or her weight. The amount of sugar in most chocolates can cause tooth decay. In addition, there is some research which suggests that chocolate can cause weak bones and osteoporosis. A study in the AJCN was conducted to reveal the relation between chocolate consumption and bone mass in older women. Researchers decided that old women who consume chocolate every day have low bone mass and power. Generally, we can say that chocolate has many benefits to health. However, as I always say, too much of everything can be harmful to us.